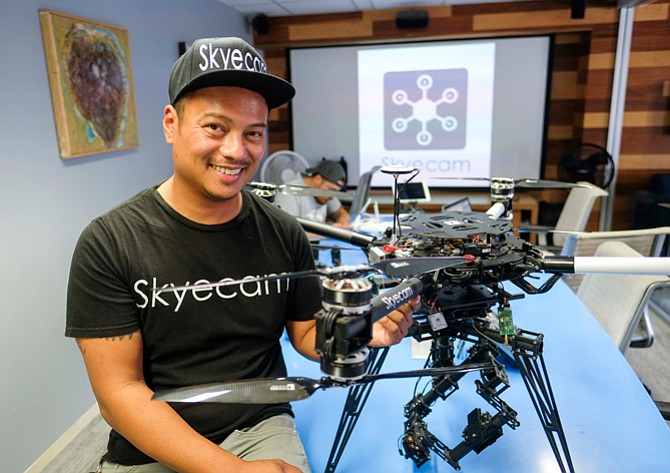 Drone filming companies are seeing a boom in business after the Federal Aviation Administration relaxed strict flight rules last August, although a number of regulatory, technical and liability obstacles remain in the atmosphere.

The new rules no longer require drone operators to obtain a pilot’s license, file a host of paperwork, or wait for FAA flight approval. Operators can instead seek filming permits through local film commissions such as FilmL.A. Inc., and are only required to have a remote-pilot certificate from the FAA, which is easier to obtain than a license.

“It’s more streamlined so there’s definitely a lot more business since (the new regulations) came out,” said JJ Trinidad, chief executive of Mid-Wilshire drone filming company Skyecam. “The studios and production companies, and different events, want to use drones because they are seeing them a lot.”

Skyecam’s work has appeared on TV shows such as the “The Amazing Race” and “The Ellen Show.”

Shooting one minute of B-roll footage using a drone would cost $1,500 to $7,500 with Skyecam, said Trinidad. Helicopter film services reportedly start at $25,000 a day.

Many drone filming firms are still finding it difficult to fulfill their clients’ expectations even with the new regulatory room to maneuver.

Trinidad said Skyecam struggled to satisfy a last-minute request from a director to fly its drones over crowds at the Rose Parade in January, a flight path that would require a special FAA waiver and permission from the city of Pasadena.

“We had to come with some sort of safety flight,” said Trinidad. “They cleared out a 10-foot path for the drone in the middle of the street for us to do the flight.”

Operators said they also have to explain to their clients that some restrictions remain in place regarding drone flight near airports and at night. Drone flights can be granted waivers from the FAA, but those permission slips can take up to 90 days to be approved, said Trinidad, which is too long for many production schedules.

“Usually, when production calls us and wants to book a show or something, it’s within a month or two weeks,” he said.

Such snags frustrate businesses such as Skyecam, but the company has still seen revenue jump 40 percent year-over-year – he declined to offer financial data but said the company now has eight workers – as a result of recently relaxed FAA regulations and the growing awareness of drone filming among cinematographers, according to Trinidad.

Drones are now being used on sets in place of favor of cranes, cable cams and helicopters in some cases.

The new equipment is changing the way many projects are shot.

“We can get all these aerial shots and be done within minutes when it would take a helicopter all day to do,” said Trinidad. “When it comes to studios, time is money.”

Drone filming is best suited for shots that are too high for a crane but too low for a helicopter, said Matthew Feige, chief operating officer of Mid-City-based Drone Dudes, who noted flying a helicopter also comes with risks.

Drone Dudes saw revenue drop when the FAA first started regulating drones several years ago, according to Feige, only to see it rebound this year after the rules were relaxed. The company is on pace for about $500,000 in revenue this year.

The company has worked on commercials for Toyota Motor Corp.’s Lexus and Ford Motor Co., as well as a music video for country singer Miranda Lambert.

But there are still some jobs that require helicopters, said Feige, whose business occasionally contracts helicopters for shoots.

Aerial shots more than a mile long are problematic because they run out of a drone operator’s line of sight, while shots above public areas are not allowed under FAA rules. Filming high-speed car chases also remains difficult for drones.

Drones also face stiff competition at altitudes of 50 feet or lower from traditional camera cranes, said Anthony Jacques, a freelance camera operator whose credits include “Game of Thrones,” “X-Men: Days of Future Past” and “The Martian.”

“(With) a crane you can shoot sound, you can put it right in the actor’s face,” he said. “Drones can’t get really close to actors, and you are limited by batteries.”

Feige of Drone Dudes said insurance is a must, noting higher-end operators have to maintain $2 million to $5 million in insurance per year. Those policies could cost up to $6,000 annually, he said.