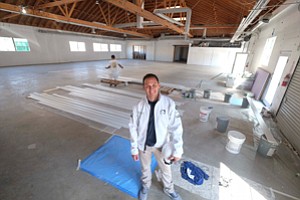 A couple of e-sports franchises in Los Angeles are investing more than $500,000 each to construct professional video-game training facilities as part of a plan to gain an edge over their league rivals and consolidate operations.

The facilities – one in Culver City being built by Immortals and another in West Los Angeles being constructed by Team Liquid – are a major step forward in the development of e-sports as a professional competition.

Team Liquid’s training center will include equipment to record competitors’ hand-eye coordination, reaction time and memory skills. Players will use the space for daily scrimmages on cutting-edge gaming computers and consoles. There are also separate spaces to review match video alongside a full-time coaching staff.

The facility is scheduled to open in September and will host several professional e-sports teams within Team Liquid’s organization, such as squads that play “League of Legends,” a battle game published by Santa Monica’s Riot Games; Valve Corp.’s “Counterstrike” and “Dota”; and “Hearthstone,” a game created by Irvine’s Blizzard Entertainment, a subsidiary of Santa Monica’s Activision Blizzard Inc.

“Having our teams and players in one location, we’ll be able to take the lessons, methodology (and) practices that we learn from one game and apply it to another,” said Steve Arhancet, a co-chief executive and co-owner of Team Liquid. “All of our teams and players will develop further and hopefully result in better performance across Team Liquid rather than individual siloed teams.”

“The fact that most teams are basing their analysis on simple spreadsheets and gut feelings is insane,” said Arhancet in a statement when the partnership was announced.

Immortals is building an 8,000-square-foot training campus divided between multiple buildings in a converted auto body shop in Culver City. The team anticipates four to five squads rotating through the facility weekly, including players of “League of Legends” and Blizzard’s “Overwatch,” among others.

The facility, set to open in the fall, is geared more toward improving player health and fitness rather than analyzing and fine-tuning performance, said Immortals Chief Executive Noah Whinston. He noted the center, in addition to hosting daily strategy meetings, will house a gym for strength-training sessions and a nutritionist tasked with making sure players get enough to eat.

“E-sports players are already good at optimizing their game play,” he said. “We find the greatest areas that need improvement are outside the game: physical fitness, mental health, nutritional planning.”

Immortal’s “League of Legends” team of five players and six support staff currently live and practice inside a large house in Brentwood rented out by team management.

Creating separation between living and professional environments marks another step forward for the e-sports industry.

“It helps prevents burnout from e-sports players playing 14 hours a day, working and living in the same place,” Whinston said.

Physical fitness regimes, he explained, are not intended to create muscle-bound athletes – think wrist curls rather than bench presses.

“The physical fitness is meant to be preventative for e-sports injuries, so making sure wrist and forearms are being strengthened,” he said.

Team Liquid’s facilities won’t include fitness equipment, with players attending a nearby gym instead. The center will have an in-house chef who will cook the gamers two meals a day on weekdays.

Both teams’ plan to have spaces for media production and to host fans for pictures and autograph sessions with players.

But perhaps most importantly for the franchises, the facilities are designed to help them form a cohesive unit and create a team culture under one roof.

“Our ‘Counterstrike’ team has been with our organization for a year and they’ve never met our ‘League of Legends’ team,” said Whinston. “Without a unified facility to force cross-pollination and culture creation, it’s incredibly difficult to create a unified brand.”