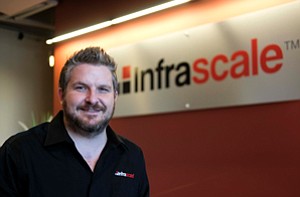 Cybersecurity companies in Los Angeles have been flooded with interest in their services after several high-profile ransomware virus attacks against corporations and organizations across the world put an exclamation point on the trend.

The headline-grabbing viruses WannaCry and NotPetya, which in May and June each infected hundreds of thousands of computer systems in a matter of days, combined with a steady tempo of smaller ransomware attacks over the previous two years, are prompting company officials to prioritize investments in cyberdefense.

Ransomware attacks often target Microsoft Word or Excel programs, encrypting files in a jumble of characters that can only be reversed with a password after a ransom is paid in bitcoin, one of several cryptocurrencies.

Local cybersecurity executives said they are seeing an increase in revenue and the number of inquiries as a result of the stepped-up attacks worldwide over the past few years.

Case in point: Data backup service Infrascale Inc. of El Segundo grew revenue 50 percent year over year in 2016 and has seen an even sharper increase over the last two months, according to founder and Chief Executive Ken Shaw.

“Ransomware first popped on the scene three or four years ago, but it really entered the Zeitgeist this year,” Shaw said.

Infrascale’s cloud platform offers a number of business solutions including data backup, disaster recovery, archiving and file sharing. The company charges $200 a month for each terabyte of data it stores.

“The awareness that is being created is good for the entire data backup industry, even though ransomware itself is a pretty horrible trend,” he said.

Kryptos’ run rate – a projection of annual revenue based on monthly sales – amounts to four times what it was last year, according to co-founder and Chief Executive Salim Neino.

TeleSign had $89 million in 2015 revenue, which represented a growth rate of 264 percent over the previous three years, according to Inc. Magazine. The authentication firm’s customers include alcohol delivery service Saucey of West Hollywood and Irvine video-game developer Blizzard Entertainment, a subsidiary of Santa Monica’s Activision Blizzard Inc.

Spending on cybersecurity worldwide is expected to reach $90 billion in 2017, an increase of 7.6 percent compared with last year, according to research firm Gartner Inc. of Stamford, Conn.

“(Corporate) boards are supportive of investing more in cybersecurity than they may have in the past,” said Ryan Disraeli, co-founder and vice president of TeleSign.

Ransomware attacks perhaps first hit public consciousness in February of last year when Hollywood Presbyterian Medical Center’s data was scrambled by a virus and only unlocked after the hospital paid $17,000 worth of bitcoin to the attacker.

The pace of ransomware attacks has increased since then primarily because the crimes are easy to commit – even for relatively unsophisticated perpetrators. That’s because many attackers download ransomware online made by others and turn it loose on unsuspecting business owners.

Hackers in May unleashed the WannaCry virus, which exploited a vulnerability in the Microsoft Windows operating system – a sort of digital hole in the fence discovered by the National Security Agency, which was leaked to the public after the agency was hacked in April. That ransomware attack infected more than 200,000 computer systems across 150 countries, according to the European Union Agency for Law Enforcement Cooperation.

The WannaCry virus was particularly malicious because it kept many computers scrambled even after payment. North Korea has been pegged as the suspected culprit, according to leaked documents from the NSA, with many speculating the attack was driven by a desire to spread chaos rather than force a ransom payment.

Malware is often disseminated by attackers through mass emails, but WannaCry was sophisticated enough to spread through structures set up to share files, such as drives or databases. That made it more dangerous, said Kryptos’ Neino.

Kryptos played a key role in thwarting the WannaCry attack by spotting and flipping a so-called kill switch within the virus code. That prompted revenge attacks from cybercriminals. The company asked the Business Journal to refrain from providing any indicator of the location of its operations more specific than Los Angeles.

Pasadena cybersecurity software developer Guidance Software Inc. issued a report last month that says approximately 65 percent of organizations fell victim to malware-related breaches from January to May of this year – up from 56 percent in 2016. One in four organizations suffered financial losses due to an attack or breach in the past 12 months, according to the report.

Guidance shares closed at $7.19 for the week ended July 12 – a 9.4 percent weekly gain. The company has a market capitalization of roughly $229 million.

TeleSign said it has conducted internal research that found 44 percent of companies plan to adopt two-factor authentication by year’s end. That’s on top of the 41 percent of businesses that already use the cybersecurity feature.

Two-factor authentication is a process through which companies send an extra passcode to a customer’s mobile phone when they access an account online.