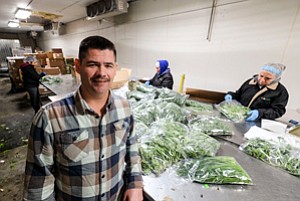 Dante Cardenas packages his oregano, sage, beets, and radishes in Vernon, but just a few years ago he ran his business, E.D. Produce Inc., out of a low-slung warehouse in the Arts District. He sold the 9,900-square-foot space in 2014, once he realized its value had quadrupled over the $1 million dollars he paid for it just a few years previously.

“It’s better for me to have something that I can leave for the future, perhaps to my children,” Cardenas said in Spanish. “Now, I have no thoughts of moving. We’re doing very well here.”

The property value is not likely to multiply as it did in the Arts District, but there are other benefits to fleeing the hubbub of the fast-developing downtown neighborhood, with its apartments, offices, and eateries. His was among several companies that have taken flight to industrial centers in Vernon, Commerce, the City of Industry, and South Los Angeles.

“The location became challenging,” said Jae Yoo, a senior vice president at CBRE who marketed Cardenas’ warehouse. “It’s not only because the trucks have to compete against people walking on the streets, which becomes a danger and a liability. What they’re doing is thinking about the future.”

As property owners look ahead, many are landing fat paychecks from developers keen on razing or redeveloping old warehouses, while lessees are finding themselves forced out.

“We’ve seen such a dramatic increase in value, that for a lot of these companies it’s very difficult for them to not consider selling,” said Chris Beck, a managing director at Newmark Grubb Knight Frank who represents industrial clients. “When you’re looking at $300, $400, $500 a square foot, those numbers are astronomical. … A lot of folks that don’t need to be right in the immediate area say, I might as well cash out and operate my business somewhere else.”

The cluster of warehouses between central downtown and the Los Angeles River cropped up in the late 1800s, catering to local growers of grapes, oranges, and grapefruit. Manufacturers began turning out clothing, furniture, car parts, and baked goods as the country industrialized in the early 1900s.

After World War II, some companies ditched downtown for modern facilities in places such as Vernon. By the 1970s, artists homed in on the vacant buildings. The area just east of Little Tokyo picked up the “Arts District” moniker in the mid-’90s, not long before Los Angeles passed the Adaptive Reuse Ordinance, allowing developers to transform old commercial buildings into apartments and condos.

Today, the Arts District is hopping with apartment buildings, offices, restaurants, bars, and shops. The industrial district at its southern edge is catching the spillover, and the development wave is expected to eventually bump against the 10 freeway.

Showa Marine & Cold Storage is among those owner-operators choosing to cash in and move out. For more than 30 years, it delivered seafood out of a warehouse where the fish are stacked in boxes reaching dozens of feet high and the thermostat is kept below freezing.

But the gourmet cafes and breweries popping up on streets once dominated by 53-foot truck trailers are a signal that the time has come to find a more suitable neighborhood.

Its co-owners have decided to sell, and have a deal with Avalon Bay that would see its home torn down to make way for apartments.

Charming Garment Supply Inc. sold its 10,400-square-foot building on Bay Street – across from a planned Soho House, a members-only social club – for $4.4 million in September to a production company. CBRE’s Yoo, who represented Charming in the sale, said the owner found a site in South Los Angeles that offers more loading and parking space.

Hill Brothers Chemical Co. said goodbye to a 13,000-square-foot warehouse on Bay for $4.7 million and consolidated operations with other locations. Developers Borman Group and Lion Real Estate Group converted the building into offices leased to Hyperloop One, and Tishman Speyer bought the site in November for $9.3 million along with an adjoining Hyperloop One office for $15.2 million.

Companies that were tenants in a building whose owner decide to sell have not reaped the same rewards.

Elegant Kids 2000 Inc. was forced to look for new digs in 2015 when owner 667 S. Santa Fe, a limited liability company, sold its 35,500-square-foot warehouse on South Santa Fe – where the importer of baby items had been based for two decades – for $9.4 million. The company relocated to Vernon.

More industrial tenants might leave voluntarily as the influx of apartments, offices, restaurants, and shops pushes up rents.

“The cost is going up so much. You can’t pay that kind of rent and compete with those kinds of uses,” said Newmark broker Beck.

L.A.’s industrial vacancy rate is sitting at a rock bottom 0.9 percent, making it harder for large tenants in particular to find industrial space to lease. However, properties are still available for companies that plan ahead, and are aggressive and willing to swallow a landlord’s asking price.

But the problem in the Arts District remains in trying to coexist with residential projects.

“You can’t have a produce distribution company with 53-foot trailers coming in at 2 o’clock in the morning next to residents who pay a lot of money to live,” Beck said.

Loft and Bear, founded in an Arts District loft in 2012, took that all into account when the artisanal vodka company decided about a year ago to buy a 20,000-square-foot manufacturing site in South Los Angeles.

“This space was eight times less than everything else we looked at within the same five- to eight-mile radius,” said Paul Ryan, the company’s chief executive. “That’s how drastic the difference is between the Arts District and jumping outside.”