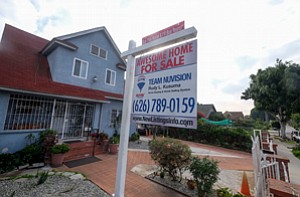 Hot Properties: Houses in West Adams sold at 3.7 percent over asking price on average last year, with a median time on the market of only 12 days. Photo by Ringo Chiu.

West Adams is one of the most competitive housing markets nationwide, according to recent data released by online real estate database Redfin.

The roughly 1.5-square-mile neighborhood, which sits south of the 10 freeway near USC, ranked ninth on the list of most competitive neighborhoods in the United States last year based on the percentage of homes that sold for more than their asking price, how quickly properties went under contract, and annual price growth.

West Adams, known for its Victorian homes and Craftsman-style bungalows, was the only L.A. community to rank in the top 30, which was dominated by parts of Seattle, San Francisco, Denver, and Boston.

Homes in West Adams received bids above asking price nearly 70 percent of the time, according to Redfin, the third highest nationally in that category. Homes in the neighborhood sold at 3.7 percent over asking price on average, with a median sale price of $550,688 – a 23 percent increase since 2015. About 38 percent of buyers paid cash, the fourth highest in that category. Homes also sold quickly, with a median time on the market of only 12 days.

“It has a mix of more affordable student homes but also nicer family homes,” said Taylor Marr, a data scientist at Seattle’s Redfin.

That type of return on investment just isn’t possible in cheaper neighborhoods such as Compton or Watts, he added.

The area’s increased demand has not correlated to an uptick in business for Nordine, however, as eager investors are approaching homeowners directly.

“I used to get a lot of listings there,” Nordine said. “Now they’re bombarded with postcards and people knocking on their door all day.”

Another thing working in West Adams’ favor is its proximity to the Westside and downtown – both of which boast high job growth and healthy nightlife but are far more expensive in comparison. For example, the Expo Line that now connects Santa Monica to downtown convinced developer Howard Kozloff, managing partner of West L.A.’s Agora Partners, to put money into a West Adams project.

“We’re trying to best capitalize on the proximity to transit,” he said.

He and his business partner own a 14,000-square-foot lot with what he called a “very old” duplex near the intersection of Jefferson Boulevard and La Brea Avenue, within walking distance of the Expo Line’s La Brea-Exposition station. They are planning to tear down the old structure on the lot and build eight three-bedroom townhouses, which they intend to sell. The developers also have their sights set on a few commercial buildings in the area.

Kozloff declined to provide pricing details, but he said the townhouses would be cheaper than what you would find in neighboring Culver City, which has a median sale price of $985,000, according to Redfin.

“It’s not luxury,” he said of Agora’s project. “It’s not meant to test the upper limits of the market. It’s meant to provide a new, well-amenitized, family-oriented product.”