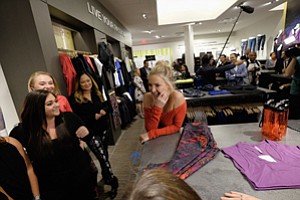 Online retailers, which for years used efficient internet operations to drive brick-and-mortar shops out of business, are bucking conventional wisdom and opening physical stores as part of a strategy to boost sales.

Perhaps the most aggressive local example of this trend is Fabletics of El Segundo, an online yoga clothing retailer co-founded in 2013 by actress Kate Hudson and TechStyle Fashion Group’s Co-Chief Executives Don Ressler and Adam Goldenberg. Fabletics, a division of TechStyle, has cut the ribbon on 18 stores since 2015 – a year in which the company reportedly hit $150 million in sales. The company plans to open 12 more stores by the end of this year.

“Since we control all of our distribution, and don’t put our product in other retailers’ stores, we need a way for customers to touch and feel it,” said Dustin Netral, senior vice president of operations at Fabletics. “This is our best way to expose the customer to our brand – what we stand for – and the quality of our product.”

Physical retail isn’t a one-size-fits-all approach, however, as evidenced by the fate of downtown’s Nasty Gal Inc. After growing sales to more than $100 million in 2012, the company turned to brick-and-mortar outlets in 2014, around the time its revenue growth started to stall. Despite opening outlets in Hollywood and Santa Monica, the strategy couldn’t stop the firm from landing in bankruptcy court in November.

Brick-and-mortar retail is a much different beast than e-commerce and businesses forget that at their peril, said James Dion, president of Chicago retail consulting business Dionco Inc.

“It’s a whole different world from setting up a website and having people at desks controlling that website and putting orders to a warehouse,” he said. “Retail is a really tough business.”

While brick-and-mortar stores represent an operational challenge, they do offer something the internet doesn’t: an easier way for shoppers – and sellers – to handle returned goods. Customers love having a product shipped to their front door, but loathe the hassle of shipping it back should they need to return it, said Dion, who noted that shipping products back can be costly for both shoppers and retailers. In certain categories, such as shoes, returns generally exceed 35 percent.

Moreover, in-store returns give retailers another opportunity to convince a customer to exchange the item for another, perhaps more expensive product.

Fabletics’ Netral said shoppers at the company’s retail stores are 20 percent to 25 percent more likely to do an exchange rather than requesting their money back.

In December, Fabletics’ retail stores accounted for about 18 percent of the company’s overall sales, he said. Much of the rest of the company’s sales come from a $50-a-month online subscription service. Customers can still buy the branded athletic wear without a subscription, though there is a markup.

While the company still makes the majority of its money online, its stores are expected to be more than showrooms and are designed to be profitable business units, said Netral.

“It’s really important to us that the stores are self-sustaining,” he said.

Other e-commerce businesses are noticing that shopping the old-fashion way – in person – is still in favor with customers.

“We know there are people (whose) preference might be to see something in store and buy something in store,” said Ariel Kaye, chief executive of Parachute Home, a Venice-based bed linen e-tailer she started in 2014. The company opened a 500-square-foot store in May attached to its Rose Avenue headquarters, which Kaye said is profitable. It has also opened a 2,200-square-foot short-term rental property nearby that showcases its retail products.

Despite the attraction of a brick-and-mortar store for some e-vendors, placement of the outpost can sink or lift a business, said Dion.

“You may have a location that has a lot of foot traffic, but it could be the wrong kind of traffic,” he said. “You may be next to the Social Security office, and you’re selling 11-year-olds clothing.”

That could be the case with Nasty Gal’s store on Santa Monica’s Third Street Promenade, a location that appears to have underperformed, said Jerry Jao, chief executive of Santa Monica’s Retention Science, an analytics firm that helps e-commerce retailers retain customers. Nasty Gal also has a store on L.A.’s trendy Melrose Avenue.

“Nasty Gal, they are more trendy and aggressive,” he said. “Melrose in Hollywood is definitely a little better (for the brand) than Santa Monica, where it’s a little more mainstream.”

Representatives of Nasty Gal did not respond to a request for comment.

Fabletics’ Netral said that after opening 18 stores, the company has honed its strategy.

“What we really look at is population density within a 10-mile radius, how we perform online within those specific ZIP codes, and how our competitors perform,” he said. “It allows us to place these stores with pretty scary accuracy in terms of how well they are able to perform.”

For others, brick-and-mortar retailing is less of a science and more of an art.

“We tend to look for areas that are up and coming because it excites us to affect change in that area and be part of something that can grow,” said Ted Vadakan, co-owner and chief executive of Poketo, the artisan home goods business.