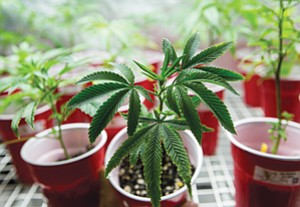 Owners of cannabis businesses in the city of Los Angeles are closely watching the upcoming election, hoping voters pass Measure M, a City Council-backed proposal that would lay the groundwork for lawmakers to begin implementing a local regulatory system for the industry.

Given the overwhelming support voters showed for marijuana legalization in November’s statewide recreational pot referendum, supporters of Measure M should feel comfortable predicting victory – and most say they are. However, due to bickering among local cannabis business factions this fall, there is a second initiative, Measure N, before L.A. voters on March 7, which has raised some concern despite the fact that Measure N’s backers have withdrawn their support in favor of Measure M.

“Measure N could definitely be confusing for people who don’t know the situation,” said dispensary operator Virgil Grant, co-founder of cannabis business trade group Southern California Coalition, which is backing Measure M. “If you read both, you might think that N is the better one.”

Vanessa Rodriguez, a spokeswoman for City Council President Herb Wesson, said in an email that the councilman, who has spearheaded efforts to address local regulations, was hopeful voters will pass Measure M. She added that the legislative body would have final authority to tweak any part of the new marijuana regulations, including the tax structure, in Los Angeles going forward based on community input.

“The City Council retains the ability to finalize all cannabis-related regulations by ordinance and will thoroughly vet all proposals at that time,” Rodriguez said. “Everything is on the table and the council president is encouraging a robust public discussion on future policy.”

That robust public discussion is partly responsible for the existence of competing ballot measures in the first place.

From a big-picture perspective, measures M and N are very similar. Both would establish a licensing system for cannabis businesses that follows the state’s model; both call for a local tax structure for medical and recreational pot; and both would levy fines against persons operating commercial marijuana concerns in violation of those laws.

While there are subtle differences on those issues, the biggest schism, which caused last fall’s dustup among cannabis trade groups, is over the baseline number of pot shops awarded licenses, and how much priority should be given to existing medical marijuana operators who have a special designation under Proposition D, the current city weed law.

Measure N calls for no more than 135 medical licenses – the same number of medical marijuana dispensaries allowed to operate under Proposition D, with priority given to “existing medical marijuana businesses compliant with current city law.”

Measure M’s language, however, calls only for “priority in the processing of applications” for compliant dispensaries.

Jerred Kiloh, president of the United Cannabis Business Alliance Trade Association, which spearheaded Measure N, said even though Measure M does not establish a baseline number of licenses, his group now supports it. Having an initiative supported by the City Council with largely similar provisions was more important, he contends.

“We’ve made it pretty clear in all our publications that we support Measure M now,” Kiloh said. “It’s just a matter of people paying attention and reading the ballot summaries. With the demographic voting in this election, which is older and usually more sophisticated, we feel pretty confident there won’t be an issue.”

Measure M’s passage is particularly important because local licenses are required for cannabis businesses to get a state license once that program comes online on Jan. 1. Without both a local and state license, any pot shop, grower, manufacturer, or distributor doing business on that date will be operating illegally, according to Grant.

“It would be devastating to the industry in L.A. if we don’t pass local regulations,” said dispensary operator Grant.

Even if Measure M passes, there still will be issues that need to be worked out.

While regulatory frameworks are in place at the state level and starting to be implemented at the county and city levels, there’s still a lot of uncertainty about the practicalities of how the system will work.

One of the biggest concerns is taxation. The state will levy a 15 percent tax on all marijuana sales as part of Proposition 64, which alone wouldn’t be prohibitive. However, local governments can also implement taxes, such as Measure M’s proposal to charge an additional 5 percent tax on medical pot sales and a 10 percent levy on recreational sales. Add in regular sales tax and suddenly there’s a 30 percent to 35 percent surcharge on marijuana sales in Los Angeles, which could wipe out profits or force consumers to the black market, according to Kiloh.

“The taxation is spread out over all segments of the industry, and it’s getting to the line where it really cuts into profit margins,” he said. “Add in higher business compliance costs to deal with more robust regulations and it becomes hard to operate in that environment.”

On top of the new regulations and high taxes, cannabis businesses can’t access the traditional banking system, which is beholden to Federal Deposit Insurance Corp. regulations that make any money touched by illegal drugs, which marijuana still is at the federal level, subject to money-laundering laws. Colorado and Washington – the first two states to legalize recreational marijuana, have tried to address the issue through a closed-loop compliance tracking system, which has had some success. That’s given a few smaller credit unions and local banks confidence to take cannabis deposits.

California is set to implement a similar tracking model, with State Treasurer John Chiang, a candidate for governor, heading an advisory committee to see how the cannabis banking crisis could be ameliorated. Kiloh, who was on a panel addressing the committee’s working group this month in Los Angeles, said he appreciates the state’s efforts though he doesn’t think much is likely to happen without a change at the national level.

“An overall answer to the banking issue just isn’t there,” Kiloh said. “Federal law and the anti-money-laundering measures can’t be overcome right now.”