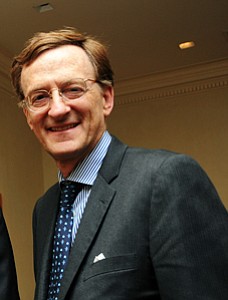 The departures came as the Marina del Rey satellite communications company announced it expected 2016 revenue to be at or near the low end of its prior guidance range of $530 million to $538 million and that it would need additional time to file its annual report with the Securities and Exchange Commission, according to a press release. The firm said it needed time to address “material weaknesses in internal control over its financial reporting.”

Global Eagle acquired Emerging Markets, a satellite communications provider of internet to remote regions of the Earth – often to cruise ships at sea or oil rigs – for $550 million in cash and stock in July. That transaction was blamed for the delayed financial filing due to the combined company’s size and complexity.

Company representatives did not respond to calls seeking comment, and no reason was given in its release for the departure of Davis and Severson.

Davis had gross compensation of $1.8 million in 2015, the last year for which statements have been filed. The last proxy statement, filed in April 2016, said Davis would have been eligible for a severance payment of nearly $1 million if he were terminated without cause.

Global Eagle makes money by charging a fee to airlines for every device on a plane that connects to the internet.

With its heavy reliance on the airline business – Southwest Airlines accounted for 23 percent of revenue in 2015 – the addition of Emerging Markets was pitched by Davis to shareholders as a way to diversify Global Eagle’s revenue streams, share infrastructure costs, and create opportunities to sell movies and TV entertainment on cruise ships. The combined operations of Global Eagle and Emerging Markets were projected to generate pro forma revenue of between $660 million and $690 million this year, according to financial filings.

Despite some notable upsides to the acquisition, the remote communications business is not well understood, Andrew Spinola, a senior analyst at Wells Fargo Securities in New York, wrote in a research note.

“We are optimistic on the potential benefit of combining these two companies and see clear strategic logic to scaling the satellite network,” he wrote, “but are cautious on the investment merits because of the size of the acquisition coupled with how little we know about the acquired business.”

Investors became nervous last year after reports surfaced that Southwest was requesting quotes from rivals ViaSat and Panasonic. In the end, its contract with Global Eagle was extended in December to run until the end of 2025.

However, that news and the company’s acknowledgment in an earnings call last year that other airlines were slow to sign, combined with the executive departures, slumping revenue, and issues with internal financial controls, have led some analysts to recommend investors take a step back from the company.

“We are moving to the sidelines on (Global Eagle) shares,” Stan Meyers, senior research analyst at Piper Jaffray & Co. in New York, wrote in a Feb. 21 research note. “The company is quickly losing investor confidence with recent challenges with its key airline partner (Southwest), lack of progress with Air China and Air France, and now the departure of its CEO and CFO.”

Yet despite some skittish investors, Global Eagle’s largest shareholder, PAR Capital Management, had not changed its position after the company’s executive departures, according to data from Bloomberg. The Boston investment fund, which has more than $8 billion under management, controls 29 million shares, 34 percent of the company. The value of its holdings fell $68.3 million for the trading week ended on Feb. 22. (See page 60.) PAR officials did not respond to a request for comment.

Company co-founder Jeff Sagansky, who left in January 2013 but still retains a seat on the board, is the largest individual shareholder, with a stake of nearly 750,000 shares. Sagansky, now chief executive of Double Eagle Acquisition Corp., a Century City blank check company formed in 2015, created Global Eagle when he structured the merger of Row 44 Inc. and Global Entertainment AG.

Sagansky did not respond to a request for comment.