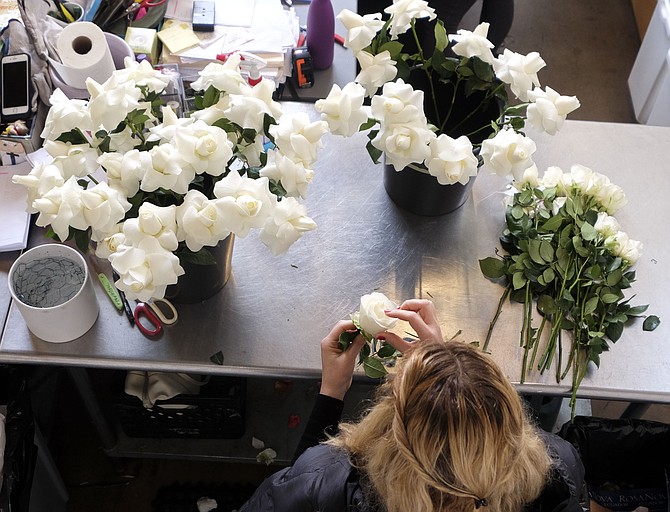 No matter which nominees come out on top at the Academy Awards, florist Eric Buterbaugh knows his business will be a winner.

Buterbaugh said his store in the Melrose shopping district might take in $200,000 or more in the days leading up to the Feb. 26 event, far more than his usual weekly revenue, though he wouldn’t say how much that was.

“I love Oscar week,” said Buterbaugh, a well-known floral designer to the stars. “It’s one of my favorite times to be in this business.”

Then as the congratulatory and thank-you bouquets go out the Monday after the awards, that can be one of his biggest days of the year.

“There are just flowers flying everywhere – it’s like my Valentine’s Day,” he said.

Many other local businesses also boom during the Oscars.

“The Academy Awards alone generate more than $200 million in economic activity for L.A. County in a single year that supports florists, salons, caterers, stage managers, hotel employees – and draws tens of millions of eyes to the magic of Los Angeles,” Mayor Eric Garcetti said in an e-mail.

An economic impact study commissioned in 2013 by the Academy of Motion Picture Arts and Sciences identified at least $67 million in “immediate, identifiable” benefits to the county from the Oscars.

The study revealed an additional potential boon, though much more speculative: If one-quarter of the estimated 40 million Oscar telecast viewers in 2013 visited Los Angeles as a result of seeing the event, an additional $149 million in local revenue would be generated, bringing the total benefit to more than $200 million in economic activity.

Alex Darbahani, president and owner of KLS Worldwide Chauffeured Services, said his company brings in between $180,000 and $200,000 in Los Angeles during Oscar week alone.

For the Beverly Hills company, only the Grammy Awards represent higher revenue generation because the company has contracts with MasterCard and several other event sponsors. He wouldn’t provide his company’s annual revenue.

For Oscar day, KLS usually has between 180 and 230 vehicles servicing Academy Award-related clients, including some drivers contracted from smaller companies. Trips not only include airport transportation and rides to the awards, but also chauffeuring celebrities around town for gown and tuxedo fittings, jewelry pickups (many celebrities borrow their Oscar bling from top jewelers), beauty treatments, and ancillary trips for the stars’ private stylists.

Even though it’s awards time, KLS must also have vehicles available for its regular clients.

Limousines not only draw too much attention, they also are hard to maneuver in hilly neighborhoods or private drives where many stars live.

Darbahani said his drivers must be prepared to switch cars with another driver during a trip from the airport to throw the paparazzi off the trail. Many top celebrities arrive by private jet so are not being picked up at baggage claim like an ordinary passenger.

Escalades and similar vehicles can be rented for $95 to $105 an hour. A Mercedes-Maybach sedan or a Rolls-Royce can be had for $350 an hour.

While Uber and Lyft might snag some of the business from taxis for celebrity staff, security-conscious stars prefer private chauffeur services, Darbahani said.

“I don’t see Jennifer Lopez using Uber,” he noted. “The type of clients we are driving don’t want people to know where they live.”

The company has been booked solid five weeks out for private Oscar Sunday parties and even had to turn down several events, she said.

“This is the first year, in 34 years of business, we have been fully committed and could not take any additional bookings for the Academy Awards,” Saltzman said.