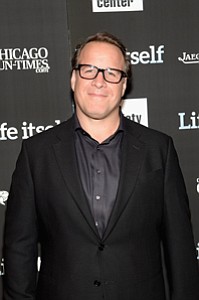 This month caps a tumultuous year for the Los Angeles Times and its parent, tronc Inc. The Chicago media company began last year as an old-line newspaper business with a traditional newspaper name – Tribune Publishing – and spent the next 12 months transforming into “Tribune online content,” or “tronc.” If that weren’t enough, it relented on a hostile takeover attempt after months of resistance, only to see the deal collapse at the eleventh hour.

The tumult started last February, when technology executive Michael Ferro announced that his company, Merrick Ventures, had taken a nearly 17 percent stake in the business and that he would become chairman.

The new leader purged Tribune Publishing’s chief executive, Jack Griffin, and moved Times Publisher Timothy Ryan into a corporate position. In an unprecedented move, Times Editor Davan Maharaj was given the additional title of publisher, merging the business and editorial side of the newspaper under a single leader.

“Our goal is to outperform our peers,” he said.

“We think over the long term we’re set up to do just that.”

“We have to create a billion-dollar online media business,” he told investors.

Tronc, with a $495 million market capitalization, is aiming to boost earnings this year even as its revenue is projected to stay virtually flat. Analysts tracking the company said nailing this goal while setting a foundation for growth could be a tall order, especially as print media continue their audience and advertising decline.

While the company saw paid digital-only subscriptions, a key metric, rise over the past year, its third-quarter earnings declined after two quarters in the black.

“They have lofty expectations of how they’ll make it a digital media company,” said Nishen Radia, a managing partner at West L.A. investment bank FocalPoint Partners. “They’re going to get a bit of leeway from the market to execute their plan. But next year, they’re going to need to show meaningful growth.”

A tronc spokeswoman said the company could not comment during a quiet period ahead of its Feb. 22 earnings release.

Ferro entered the picture just a couple of years after Tribune Co. spun off its newspapers into Tribune Publishing.

Under Ferro’s leadership, Tribune Publishing began to put greater emphasis on digital offerings, eventually changing the company’s name to tronc. Though widely mocked, the moniker did not diminish the value of business.

Gannett Co. made three passes at acquiring the business – first at $12.25 a share in April; then at $15 the next month; and finally at $18.75 a share in August, putting the company’s value at about $1 billion.

Tronc and Gannett eventually worked out a deal, but it fell apart when the banks set to finance the transaction balked in the wake of a weak third-quarter earnings report from Gannett.

Though tronc’s stock dived after the deal fell apart, it has rebounded. Shares closed Feb. 1 at $13.45, up 44 percent since January of last year.

The share price signals to Bloomberg analyst Paul Sweeney in New York that investors are optimistic.

“As challenged as the newspaper industry is, there’s only one L.A. Times,” he said.

Readership is creeping up, particularly digital subscriptions – the standard that has replaced print circulation as a key metric. By the end of the third quarter, tronc boosted its number of paid digital-only subscribers by 69 percent compared with a year before, reaching 136,000 total subscriptions, Dearborn said in a December memo to investors.

By the end of the year, tronc counted just under 1 million customers with digital subscriptions, including print subscribers granted digital access.

Tronc websites in the fourth quarter drew an average of 56.7 million unique visitors a month, the company told investors. The Los Angeles Times drove 63 percent of that traffic, with about 35.5 million visitors monthly.

On the print side, tronc publications together had an average Sunday circulation of 2.9 million in the fourth quarter, with about 29 percent generated by the Times with a circulation of 828,000.

Yet even notable readership gains are not enough to compensate for declining print advertising revenue. For tronc, that was the case in the third quarter, when it reported revenue of $378 million – a 6.8 percent drop compared with the year before, partially attributable to a 10.9 percent decline in advertising revenue. That yielded adjusted net income of $8 million in the quarter. After factoring in additional costs, the company took a hit of $10 million.

Tronc has been trying to reposition itself with a digital focus that includes more videos and efforts to boost online ad revenue. It isn’t clear if that’s righting the ship.

“They’ve been tampering around the edges,” said Ken Doctor, a media analyst for Politico based in Santa Cruz. “They have not shown in one year, at all, the ability to execute a new strategy.”

“It’s going to be really tough this year, given projected revenue is down, and earnings are up,” said Doctor. “You can get really efficient, you can figure out something really good about your business model, or you can keep cutting expenses.”

“That means fewer reporters,” he said. “They’ve already trimmed the fat. Now they’re cutting into the bone. It’s the reporting; it’s the newsroom.”