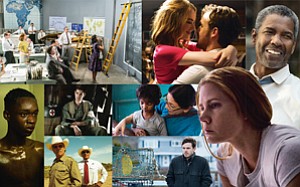 THE MONEY: Independent financiers FilmNation and LavaBear funded the film, which topped $100 million in global box office in just one month. Screenwriter Eric Heisserer received the Writers Guild of America minimum of around $100,000 for his screenplay, but got an executive producer credit.

SUMMARY: An expert linguist leads a team of scientists desperate to communicate with alien visitors.

OSCAR BUZZ: Few critics believe “Arrival” can stand up to favorites “La La Land” and “Moonlight,” but best actress nominee Adams might sneak away with a win.

THE MONEY: Canadian money is behind this American story. Wells Asset Management, based in Lloydminster, Alberta, jumped into the movie biz to provide some of the financing, which President Dale Wells called a no-brainer.

OSCAR BUZZ: Perhaps because of its theater roots, this one gets more buzz for actor awards than its best picture chances.

THE MONEY: Permut has said it took WWII story “Hacksaw Ridge,” directed by Mel Gibson, 16 years to make it to the screen. It was funded in part by Kylin Pictures International, which has financed many Asian productions.

SUMMARY: The true story of medic Desmond T. Doss, the first conscientious objector to win the Congressional Medal of Honor for saving soldiers during the Battle of Okinawa.

OSCAR BUZZ: Between mixed reviews and the unpopularity of director Gibson with the Hollywood community, this one’s a long shot for best picture.

THE MONEY: Sidney Kimmel Entertainment, where Hacken is president of production, purchased the script in 2012, and this nomination should help step up its position in the independent film scene.

SUMMARY: Two brothers make an unlikely pair of bank robbers as they take desperate measures to save the family ranch.

OSCAR BUZZ: Before the Oscar nominations, Gold Derby’s Oscar handicaps ranked “Hell or High Water” eighth out of nine as a possible best picture winner. Some critics called it the best movie of the summer.

SUMMARY: Based on a true story, NASA taps a group of female African-American mathematicians to calculate John Glenn’s historic launch into orbit.

THE MONEY: Lions Gate said yes to this project when others said no, and the studio is reaping the benefits. Still to come: A run on HBO, more international markets including China, the movie soundtrack, and rumors of a stage musical.

SUMMARY: In this contemporary musical with a nod to classic Hollywood, an aspiring actress and a jazz musician fall in love.

OSCAR BUZZ: It’s the one to beat, even without winning the all-important Screen Actors Guild cast award. Hollywood loves Hollywood.

SUMMARY: An Indian boy adopted by an Australian couple uses Google Earth to search for his birth family as an adult.

OSCAR BUZZ: Weinstein has a history of aggressive (read: expensive) campaigns that take small movies to big Oscar wins, but this one seems to be getting drowned out by “La La Land,” and “Moonlight” has the buzz for the little movie with a chance for an upset.

Manchester By the Sea

THE MONEY: Producer Steward, the second black woman to be nominated for a producer Academy Award, financed the project through her new company, K Period Films. Amazon paid $10 million for distribution rights.

SUMMARY: An uncle faces family demons as he returns home to care for his nephew after his brother dies.

OSCAR BUZZ: Some Oscar watchers say it’s the stiffest competition for “La La Land”; others say it might only win actor awards for Affleck or Williams.

THE MONEY: The producers stand to profit, as the smaller the film, the bigger the box-office boost from nominations that make the public more aware of a movie.

SUMMARY: Based on Tarell Alvin McCraney’s play “In Moonlight Black Boys Look Blue,” the story of a young man growing up in Miami and coming to terms with his homosexuality.

OSCAR BUZZ: With loads of critical acclaim and a Screen Actors Guild supporting award for star Ali, some critics say “Moonlight” still has a chance to win best picture.