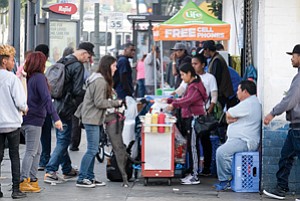 Street vendors should soon have new protections that would allow them to operate legally and prevent them from running afoul of immigration officials as a result of selling their products.

Spurred by fear that a push by the administration of President Donald Trump to deport illegal immigrants might sweep up street vendors in the city who are cited for minor infractions, the Los Angeles City Council voted 12-1 last week to decriminalize street vending.

The decision, which included a compromise on how to regulate the practice, was a major victory for vendors, who have struggled for years to be recognized.

The vote removed street vending from the list of misdemeanor violations and transferred jurisdiction over code violations to the city’s Building and Safety Department and away from the courts. Both moves are designed to ensure that street vendors have no criminal records that could be used by immigration enforcement officials to deport them.

The decriminalization would take effect immediately upon Mayor Eric Garcetti’s signature, which could come as soon as this week, after the council takes a second confirming vote.

“This decriminalization is a huge victory,” said Mike Dennis, director of community organizing with the East Los Angeles Community Corp., a nonprofit that has been pushing for legalizing street vending for five years.

The council also voted 11-2 to approve in concept a series of proposals crafted by Councilmen Joe Buscaino and Curren Price that lay the foundation for regulating street vending.

The proposed rules were a compromise from an initial move to give blanket legalization for street vending throughout the city. Instead, a majority of property and business owners, and in some cases residents, would be able to petition to have certain streets excluded from vending.

The council kept another element, however, that would require street vendors to have majority support from businesses in the immediate area where they want to operate.

The proposals now go to city staff and the City Attorney’s Office for the crafting of a detailed ordinance to regulate street vending, which could come back to the council within 90 days.

The compromises were welcomed by business groups that opposed earlier legalization proposals.

“We are pleased the council heard us and recognized that one size won’t fit all in a city that spans 500 square miles,” Jessica Lall, chief executive of the Central City Association, said in a statement. “The framework includes some really smart provisions, including the requirement that stationary sidewalk vendors have the consent of adjacent business or property owners.”

The proposals also would require the city to set permit fees at a level that ensures full cost recovery for enforcement of the street vending ordinance.

Street vending proponents such as Dennis said this would discourage many potential street vendors with little or no access to capital from setting up shop, but business groups welcomed the higher permit fees. They said the fees would allow for stricter enforcement against operators who lack permits or otherwise violate the rules.

“We recognize that the success of the program will depend on fully funded and effective administration and enforcement,” the Coalition to Save Small Business said in a statement.

The coalition is composed of businesses, business improvement districts, and other community organizations and individuals that seek to regulate sidewalk vending.