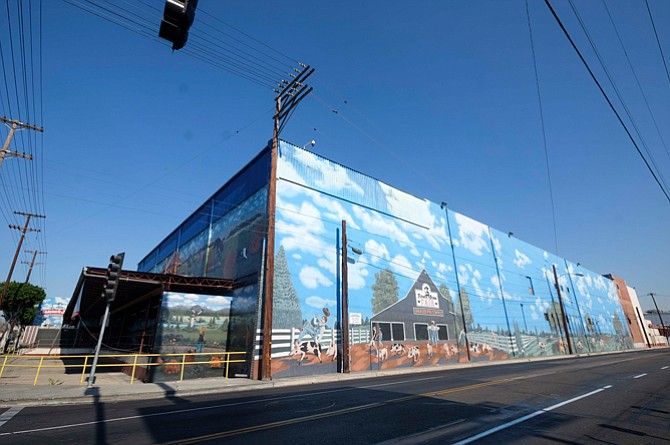 Dale Gibson was taking care of some unfortunate business – a dead cow in his pickup truck.

The animal broke its neck after it got caught in a fence at his Gibson Ranch in Shadow Hills, where a few cattle still mix into the patch of horse country in the Verdugo Mountains in the northeastern San Fernando Valley.

The romance of the range was long gone by time Gibson got to Vernon, an industrial center on downtown’s southeastern flank.

“I pull up and there’s a 20-foot high pile of dead animals waiting to be churned,” Gibson said. “That was my first and last time ever disposing an animal of mine that way.”

That was five years ago, and reservations have grown about the odors that come from rendering operations in Vernon – where meat packers and processors operate alongside four plants that turn animal parts, carcasses and by-products into ingredients for everyday products such as pet food, fertilizer and cosmetics.

Complaints from some of the handful of residents of Vernon as well as others in Commerce, Maywood, Bell, Boyle Heights and other parts of Los Angeles have prompted new regulations that could jeopardize the rendering business throughout Southern California.

The facilities in Vernon and one in Los Angeles must sharply reduce odors from their facilities under the new local air pollution control rule by enclosing the rendering processes. Upgrades to facilities could potentially cost each the companies around $500,000 a year, according to South Coast Air Quality Management District officials.

The South Coast Air Quality Management District, or SCAQMD, adopted the new rule last month after fielding an average of 35 complaints a year about the odors for the last decade, according to the agency.

“We don’t think these odors are associated with health effects, but it does affect the quality of life,” said Sam Atwood, a SCAQMD spokesman. “I don’t know if you’ve been around these plants but it does cause a strong, definite reaction.”

Farmer John processes and packages mainly pork products, including the Dodger Dog hot dogs sold at Dodger Stadium since the 1950’s, according to the company’s website.

The new regulations call for the facilities to enclose any operations that generate the objectionable odors – including receiving areas for raw material; cooking and processing operations; and wastewater treatment – either within a permanent structure or within a closed system.

The companies will have two to four years to make the permanent changes, but there’s also a three-month deadline to implement other rules considered a matter of “housekeeping.”

“Housekeeping rules are things like repairing cracks in pavements where liquid can accumulate and cause odors,” Atwood explained.

The overall program could lead the rendering facilities to rethink their local operations.

“It is going to affect the companies one way or another,” said Jessica Meisinger, a spokeswoman for the National Renderers Association trade group. “Rendering plants have complicated equipment and processes. I can’t speak to the specific five companies mentioned, but retrofitting, building new plants and jobs are things to consider.”

Vernon is a self-proclaimed industrial city formed to be “uniquely friendly to business,” the city’s website states. Its 5-plus square miles hold more than 1,800 businesses, including food and agriculture outfits, apparel manufacturers, steelworks, plastics makers, logistics firms, and home furnishings suppliers. Businesses in Vernon employ about 55,000, while the residential population is a little more than 100 – part of the reason that industries such as meat processing and animal rendering have traditionally gravitated to the city.

Data from the state’s Employment Development Department indicate there are about 5,000 job in the “animal slaughtering and meat processing” category tracked by the agency in L.A. County.

Vernon likely accounts for a significant share of the countywide total—thanks in part to Farmer John, a household name that was processing as many as 7,400 hogs a day there as recently as 2016, when one-time Farmer John parent Hormel Foods Corp. sold the brand to Smithfield Foods. Hormel said Farmer John’s and two other subsidiaries sold in the deal combined for $500 million at the time.

Vernon Chamber of Commerce members, L.A. County economic development experts and the five companies cited in this report either did not return calls or declined to comment for this story.

L.A. City Councilmember José Huizar, who grew up and still lives in Boyle Heights, did respond. He’s been a vocal proponent for the SCAQMD’s new rules on the rendering facilities.

“… For decades, the smell pollution from nearby rendering plants has been part of our reality as Boyle Heights’ residents,” Huizar wrote in an email to the Business Journal. “That needs to change. The SCAQMD first proposed (the new rule) more than three years ago and its time for implementation has come.”

Other states, including Texas and South Carolina have enacted similar odor controls, according to the SCAQMD.

It is unclear if the companies in and near Vernon will relocate or perhaps consolidate operations in bids to comply with the longer-term measures of the regulation.

Meisinger of the rendering trade association stressed the importance of the businesses from a commercial and environmental standpoint.

The U.S. livestock sector slaughters more than 150 million head of cattle, calves, hogs, and sheep and more than 55 billion pounds of poultry annually. The rending industry consists of about three dozen firms operating more than 200 plants across the U.S. and Canada. Meisinger said that 50 percent of animal parts that are not edible are what the rendering companies process.

“If rendering stopped tomorrow, it will fill up every available landfill space in the country in four years,” she said.