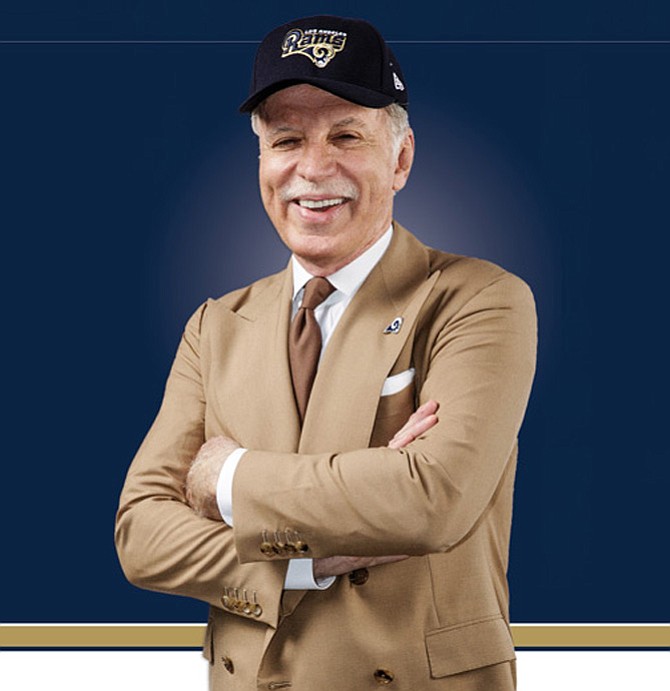 I think the vibrancy of the city – it’s an amazing place. I’ve had a house here for 20 years. I just think L.A. continues to evolve. It’s an amazing place culturally, and I think that sports is an important part of any cultural scene. I just think L.A. is a world-class city and you have that sort of drive behind it. It used to be, I thought, more of a company town [for the entertainment industry] but now there’s all the tech and other industries that are making an impact on the city.

How will Inglewood fit into the scene once the L.A. Stadium & Entertainment District at Hollywood Park opens?

I was in Minnesota recently, and Mark and Zygi Wilf just built that beautiful new stadium up there, and they’re using the same architect we’re using at Hollywood Park, and they’re real estate developers. They know the business, and they say “what a location” [about the Inglewood site]. It’s an amazing fact that there would be 300-plus acres sitting in the middle of L.A. We have the Olympics, Super Bowl and now the College Football Championship all announced for our building – that’s extremely exciting. And we couldn’t do it without the NFL or without the [city of Inglewood and Mayor James T. Butts, Jr. ] or the city of Los Angeles and all the efforts by [Mayor Eric Garcetti] and the [Olympic bid] committee.

Does that lineup of mega-events – and the fact you have two NFL teams as tenants – sum up why the Rams made the move back to the Los Angeles market?

I think the fact that there are so many Los Angeles Rams fans [was a key reason]. First and foremost that’s us—we’re the Los Angeles Rams. I think it’s a wonderful opportunity to build one of these stadiums. You see what they cost, and it’s a big undertaking, and the fact that you have an L.A. sports scene that’s so vibrant and very attractive with the entertainment [aspect] – the entire development is an Entertainment District at Hollywood Park. And [NFL Commissioner Roger Goodell], that’s what he wanted. In 2012 … he had his wish list … and there were two main things: An iconic stadium within a larger entertainment district.

Were there any other sites on par with the opportunity in Inglewood in terms of land acquisition, draw area, media market?

I was on the L.A. committee for a long time, and we looked at lots of different locations [in Southern California] and all of them had their pluses and minuses. But I’ve spent most of my adult life being a real estate developer and still do a lot of it, and it was clear to me that that was a unique site.

Are there untapped revenue streams or opportunities you see down the road?

How do you balance the marketing competition with the landlord-tenant relationship with the Chargers?

Well I think that [Chargers Owner] Dean [Spanos] and I have always been friends. They sort of pitted us against one another on this stadium thing, but I think Dean’s all in. His team is playing well, and I’m glad he’s with us. It makes a stronger situation for the stadium.

How about e-sports? You have a Los Angeles franchise in the recently launched Overwatch League. What do you expect with that endeavor?

[My son] Josh is leading that charge – and of course Bobby [Kotick, chief executive of Santa Monica-based Activision Blizzard, is a driving force] with the Overwatch League. I’ve known Bobby for 15 or 20 years. We have a lot of friends in common. He’s an amazing guy – my biggest mistake with Bobby is that I kind of knew what he was doing but I never bought any of his stock.