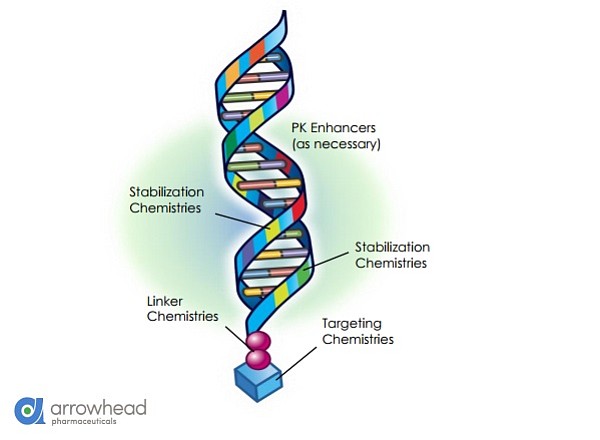 Arrowhead Pharmaceuticals Inc., which develops drugs to treat stubborn diseases by silencing the genes that cause them, reported a fiscal 2017 year-end loss of $34 million compared with 87.7 million in red ink a year earlier.

The narrowed loss came on a $31.2 million year-over-year gain in revenue The Pasadena-based firm reported late Tuesday that in the 12 months ending Sept. 30, its revenue was $31.4 million compared to $158,000 during the same period last year.

Arrowhead acquired Novartis AG’s RNAi assets two years ago for $35 million in cash and stock to bolster its position in a field of gene therapy known as ribonucleic acid interference (RNAi), which aims to silence certain genes in order to stop the production of proteins that cause hepatitis B and other idiseases.

The 28-year-old firm last year sold a 4.5 percent equity stake to Amgen Inc. of Thousand Oaks for $35 million up front, plus a $21.5 million injection, with the potential for another $617 million in milestone payments. Amgen also received options to exclusive licenses.

The morning after its financial report, shares of Arrowhead Pharmaceuticals fell nearly 8 percent to $3.28 on the Nasdaq Global Select exchange, with its market capitalization dropping from $265 million to $246 million.