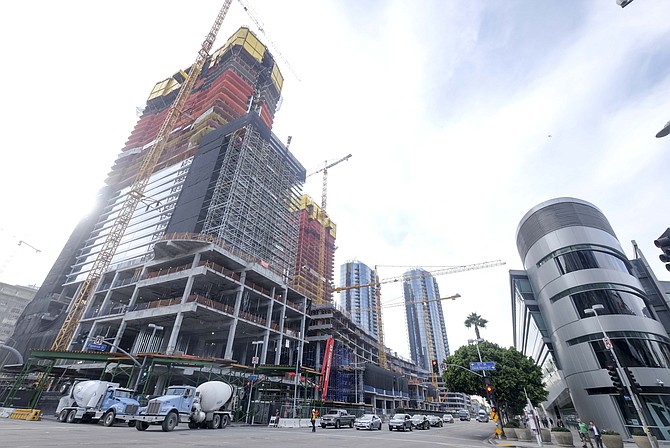 Site of Lightstone Group’s proposed hotel on Figueroa Street across from the Los Angeles Convention Center Photo by Ringo Chiu.

A drab sea of parking lots that have blanketed the east side of Figueroa Street near Staples Center for 20 years could be transformed into a Times Square-like zone as part of the city’s larger strategy to feed the nearby L. A. Convention Center with larger events.

The three massive projects underway or planned are seen by some city officials as necessary ingredients to reap the full benefit of an expected expansion of the municipally owned convention center.

The three projects, each a block wide, call for a mix of uses, and are located across Figueroa from the convention center, Staples Center and L.A. Live.

Overall, they are anticipated to bring more than 1,600 new hotel rooms, hundreds of housing units and numerous restaurants and retail stores.

The Oceanwide Plaza project currently under construction will bring nearly 200 hotel rooms and 500-plus condos above a shopping center; the Fig+Pico project planned a block south would deliver, if approved, 1,130 hotel rooms atop shops and restaurants; the Hazens L.A. Center anticipates 300 hotel rooms and 435 condos at the other end of the row, at Olympic Boulevard and Figueroa.

All the structures would be illuminated by giant LED displays that might call to mind the famed Times Square in Manhattan.

“(The project) will provide a greater choice of hotel inventory, and attract an increasing volume and variety of conventions that will help fill an expanded Convention Center,” said Rynders.

“To me, this is the epicenter of Downtown L.A. and our project will fit in with the other projects within the neighborhood,” Rynders said.

Oceanwide Plaza will feature a 184-room Park Hyatt Hotel and 504 condo units. The project will be the tallest residential building in Southern California, according to the developer, and include a 700-foot-long, 35,000-square-foot ribbon-shaped LED sign along Figueroa.

China-based Shenzhen Hazens Real Estate Group is planning a 300-room W Hotel as part of the Shenzhen Hazens L.A. Center project a block north, on the corner of Figueroa and Olympic, according to Simon Ha, a partner in downtown Los Angeles-based Steinberg Architects.

Shenzhen Hazens also is in the process of obtaining city council approval of its project, Ha said.

Doane Liu, executive director of the Los Angeles Department of Convention and Tourism Development, likened the future vibe of the neighborhood surrounding the convention center to the Roppongi district of Tokyo, Japan, a neighborhood known for being an entertainment and social epicenter for that city.

“I think this district will definitely be an expansion of the success of L.A. Live,” Liu said.

The three adjacent projects together are seen as the next step toward the city’s goal of adding 8,000 hotel rooms within walking distance of the convention center, according to Councilman Jose Huizar’s office. The city is already at 67 percent of the goal, according to Huizar’s office, with 5,354 rooms built or under construction. The Lightstone project alone would bring the total to 81 percent of the goal.

Liu of the city’s convention and tourism department, said the benchmark of 8,000 hotel rooms was the figure the city determined to be enough to be able to compete with major convention center cities like San Francisco and San Diego and attract big conventions.

“That’s what we think it would take to compete with San Francisco, San Diego and Anaheim,” Liu said.

Ted Fikre, vice chairman of AEG, which owns the Staples and L.A.Live – and is contracted with the city to manage the convention center – said the firm endorses the need for more hotel rooms over time, but offered a note of caution.

“We support the objective of increasing the supply of hotel rooms near the Convention Center over time,” Fikre said in a statement. “But hotel development is capital intensive and high risk, so it is important to be thoughtful about the pace at which new projects are brought to market.  Additionally, not all hotels yield the same benefits or warrant the same public assistance, as full service group hotels are the most expensive to build and operate, but are also best suited to spur the event business which is a key driver of Convention Center success and related economic activity.”

The Los Angeles City Council is expected to move soon on development agreements for the L.A. Center and Fig+Pico projects, with final entitlement approvals expected next year.

The city’s Economic Development Committee voted unanimously Nov. 28 to approve an agreement to allow the city to sell $9.6 million worth of surplus land near Pico and Figueroa to Lightstone for its hotel project. The matter was approved unanimously by the city council on Dec. 1.

The development agreement calls for Lightstone to purchase two private parcels located on either-side of the city property.

A recent study presented by Huizar’s office found that the hotel project has a funding gap of $67.4 million. The agreement approved on Tuesday by the Economic Development Committee recommended the City Council allow Lightstone to cover the gap by keeping $67.4 million in Transit Occupancy Tax funds for up to 25 years.

The report, according to Huizar’s office, estimates the city will realize an additional $90.6 million in new general fund revenue from the project. New General Fund revenue will be from the transient occupancy Tax, property taxes, and various other taxes, such as sales taxes.