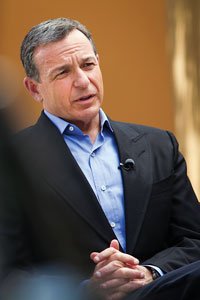 The Walt Disney Co.’s possible purchase of the entertainment assets of 21st Century Fox may result in Robert Iger staying on as Disney’s chief executive, according to a report Wednesday in the Wall Street Journal.

Disney, the largest company in the San Fernando Valley, reportedly is negotiating to buy assets of 21st Century Fox valued at $40 billion to $60 billion, depending on the analyst. It would be Disney’s biggest acquisition ever. The newspaper reported that “people with knowledge of the talks” said a deal could be announced as soon as next week.

If the deal goes through, Iger likely would stay past his July 2019 retirement date as a stipulation of the agreement, the article said. He would help with the integration of Fox’s assets and the strategic positioning of the combined businesses.

The Journal also pointed out that people close to the company have suggested that Iger, a Democrat who has been outspoken lately on liberal issues, could run for political office after retiring.