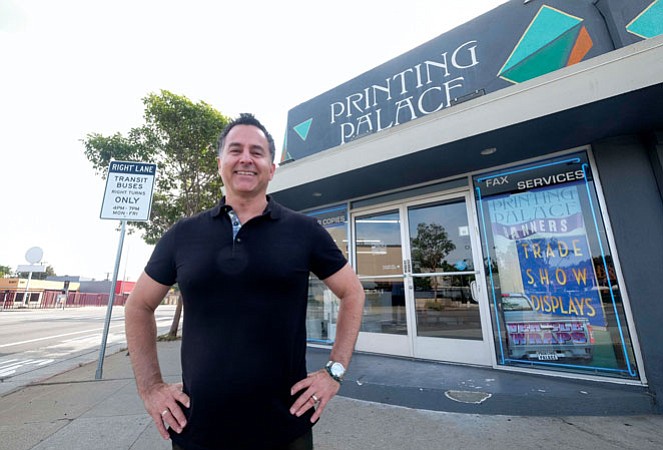 Mark Moralez remembers the day in summer of 2014 when his boss told him that he was selling his printing business – and kiddingly asked if he wanted to buy Santa Monica-based MP Printing Palace Inc.

Moralez thought about it and decided to take the plunge.

But it wasn’t easy getting a loan. Moralez had limited entrepreneurial experience and capital, and he got turned down by his credit union. A loan officer told him that printing businesses were a “high-risk loan” and his chances were slim elsewhere.

A deflated Moralez wrote about his experience on Facebook, which led to a call from a friend, Mark Morales, who invited him to Homestreet Bank of Southern California to chat. Morales was the vice president of SBA Lending at Homestreet at the time – he’s since moved on to City National Bank – and his guidance helped Moralez qualify for a $1.1 million SBA loan.

“It changed my life,” Moralez said. “One of the challenging things was finding and learning the proper channels to get to this point.”

Moralez became the owner of Printing Palace in June 2015, a business he co-owns with his husband, John Briggs. They have seven employees.

Moralez got his loan through the SBA’s 7(a) program. The 7(a) loans are made by banks, credit unions and other lenders who partner with the agency, which in turn provides a government-backed guarantee on portions of loans.

The 7(a) programs include standard bank loans arranged in conjuction with the agency. 7(a) loans can be used for general business purposes.

504 loans are made by nonprofit community development organizations or other non-bank lenders, and have more stringent guidelines and higher loan amounts used for acquisitions real estate, capital equipment, renovations and other uses.

Wells Fargo was the largest lender in the SBA’s Los Angeles district, as reported on this week’s Business Journal list, which appears on page 13 and is based on number of loans.

Wells Fargo made 393 SBA loans in fiscal year 2017 ending Sep. 30. That’s down from 638 loans it made in the same time period a year prior. The cumulative dollar amount for the loans decreased from $175 million to $147.9 million over the same period.

Overall 7(a) lending here was down about 12 percent in terms of number of loans, to 2,582 loans. Dollar volume was about flat for the 25 banks on this week’s list at $990 million, although the Los Angeles district overall saw $1.8 billion for the 12 months through September –the highest volume of any market in the country, according to Victor Parker, district director.

The Los Angeles region includes other counties, but the majority of customers the office serves is in Los Angeles County, he said.

The most recent totals account “to nearly 3,000 small business loans, ” Parker said, adding that local borrowers were a pretty diverse lot, ranging from tech startups to “main street” businesses.  Los Angeles’ leading sectors were entertainment, retail and manufacturing, although no one niche predominates.

“One of the interesting things about our local market is the number of businesses we see that cut across traditional sectors, for instance, you might have a drone manufacturer that markets to filmmakers,” Parker said.

Second on the list is New York-based JPMorgan Chase Bank which saw a slight increase in the number of SBA 7(a) loans given out. The bank offered 303 loans for fiscal year 2017 compared to 298 the year before. Its aggregate loan amount increased to $83.9 million compared to $79 million in 2016.

No. 3 is Koreatown-based Bank of Hope, followed by Minneapolis-based U.S. Bank which reported no change in the number of loans but noted

that loan volume decreased from $69.6 million to $25 million.

No. 5 is Pasadena-based East West Bank that also saw a decrease .

Koreatown-based Hanmi Bank saw the biggest leap in rankings, jumping to No. 6 from No. 17 last year, with an increase from 38 to 73 loans. The bank’s total loan volume stayed about flat $23 million.

San Diego-based CDC Small Business Finance Corp. retained its No.1 spot on the 504 list for the second year in a row.

The 10 lenders on this year’s list combined for a decline in overall value of loans, to $316 million from $361 million for the prior period.

CDC ran counter to the trend, with 100 loans for a total of $125.9 million to businesses in the LA district, up from 79 loans worth $87.3 million during the prior period.

“Right now, the 504 is a more attractive product since it comes with a 20-year fixed rate,” said Dean Aloe, senior commercial lender. Most of his clients, he said, were manufacturers or wholesalers who now face a challenge due to the lack of available industrial real estate.

“There aren’t enough buildings to purchase anymore, as a result a lot of companies are moving east ward to the Inland Empire and further.”