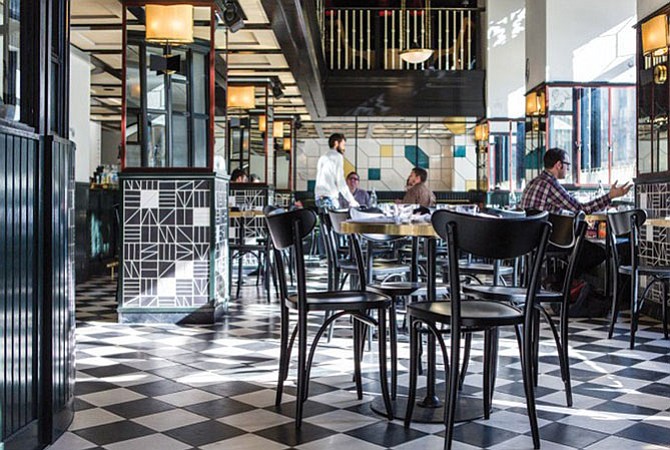 Developers are fashioning historic old buildings into new hotels to accommodate the record numbers of visitors flocking to Los Angeles these days.

It’s a strategy that comes with challenges and potential benefits, including tax credits in some cases and the chance at prime locations.

A passion for a design challenge and history drove real estate investor and developer Blvd Hospitality to renovate the Ace Hotel Downtown Los Angeles in 2014, said Jon Blanchard, founder and chief executive of the firm.

Blvd Hospitality undertook the project as part-owner of the property on the 1000 block of S. Broadway, one the edge of the Fashion District.

“There’s something really special and unique to be able to take a historic icon and bring it back to life,” said Blanchard. The firm converted the 13-story structure, which was built as a United Artists movie studio and theater in 1927, into a 182-room hotel and theater.

Blanchard declined to share the price of the Ace’s overhaul, but Blvd and the hotel’s majority owner, Weston, Conn.-based Greenfield Partners, sold it for $103 million the year after the renovation. That amounted to an 836 percent gain on the $11 million the partners paid for the structure in 2011, according to CoStar Group Inc.

President and co-owner Brian De Lowe said that project locations drive his company’s decision whether to renovate or construct from scratch.

“We’re building a hotel right in the heart of downtown Austin,” he said. “There’s not the same quantity of beautiful historical buildings you find in L.A., so we’re building a 35-story high rise.”

Kor is working on adaptive reuses of two older structures into hotels here. One is the Proper Downtown, a 145-room hotel with a rooftop pool in Los Angeles that was once a Young Women’s Catholic Association facility downtown. A second, Proper Santa Monica, was an early 1920s office and retail space that –together with a new building –will become a 271-room luxury hotel. Proper Hospitality, a hotel management brand also owned by Kor’s principals, will operate the hotels once they open in the next year or two.

The push for unconventional opportunities come as Los Angeles County’s hotel occupancy and room rates continue upward in a trend that’s been steady since 2009. The average occupancy rate rose to 81.3 percent last year from 63.8 percent in 2009, while the average daily room rate increased to $171.95 from $114.93 –an almost 50 percent jump over the seven-year run, according to the Los Angeles Tourism & Convention Board.

The revitalization of downtown L.A. and its cultural draws have bolstered its appeal as a destination alongside theme parks and other traditional draws, tourism experts say.

Downtown revivals around the country have brought renewed interest in older buildings from developers. The trend extends beyond L.A., up and down the West Coast in Sacramento, San Diego, Portland and Seattle, Reay said.

“Many areas with historic hotels, definitely throughout California, have come back very strong,” said Reay. “It’s a combination of people wanting to be downtown and businesses moving back in.”

The growing interest has made such efforts increasingly expensive.

Blvd’s Blanchard said the older buildings are becoming more expensive to buy, while construction costs also have increased since 2012, when he worked on the Ace Hotel.

“If we did (the Ace Hotel) today, the [cost of the] entire project, including what we paid for the building, would be double,” said Blanchard.

Also adding to costs locally is an ordinance enacted in the city of L.A. in 2015, requiring seismic retrofitting of certain buildings.

Blvd Hospitality is nonetheless working on plans for at least two other adaptive reuse hotels downtown. He declined to say which projects because they are still in the preliminary stages.

Tax credits also help offset the costs of historic renovations. Structures that meet historic buildings’ criteria as well as other requirements are eligible for a federal historic tax credit of up to 20 percent against hard construction costs.

The county and city also offer the benefit of the Mills Act, which allows owners of historic buildings to claim a tax credit for renovations.

There can be pitfalls despite the tax credits and potential for prime locations.

De Lowe, who declined to share the cost of Kor’s renovations, said it helps to build in a 10 percent contingency on cost when dealing with older buildings, compared to 5 percent for ground-up projects.

Owners also should factor in more time for surprises, he added.

“You’re saving on material costs, but there are added complications,” De Lowe explained. “As much as you try to discover things before you start the project, things just come up.”