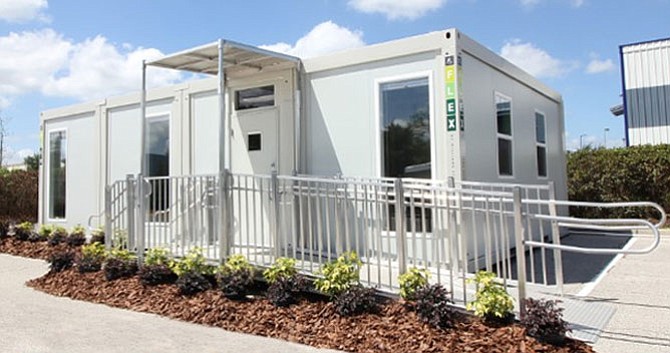 Temporary Spaces: Williams Scotsman International rents modular units, such as the one above, that can be used as mobile office trailers or storage units.

The eagle has landed.

Double Eagle is a so-called a special purpose acquisition corporation, also known as a “blank-check” outfit, which raised $500 million in a 2015 IPO and has been sitting on that cash ever since.

Double Eagle Chief Executive Jeff Sagansky said in a conference call last week announcing the deal that the newly combined company would be an active player in the M&A market after the merger closes.

“This is a fragmented business, Williams Scotsman has a 17% market share, but several of the big modular players are potential sellers,” Sagansky said. “And the economics of modular consolidation are better than in any business we know of. They’re very compelling.”

As part of the deal, TDR agreed to commit an additional $500 million, some of which is earmarked as capital William Scotsman can draw on for future acquisitions.

William Scotsman’s revenue last year was $428 million, according to Securities & Exchange Commission filings. That number was down 5.7 percent from $454 million in 2015. The company’s earnings before interest, tax, depreciation and amortization also were down slightly last year to $128 million from $131 million.

Double Eagle is the third special purpose acquisition deal done by Sagansky and partner Harry Sloan. The pair are both former Hollywood execs – Sloan was formerly chief executive of Metro-Goldwyn-Mayer Studios Inc. and Sagansky was president of CBS Entertainment.

Clearlake Capital Group is on a run.

“Our original investment thesis four years ago was to transform Futuris into a leading global supplier in the automotive industry through operational initiatives, organic growth and acquisitions,” said Clearlake Managing Partner and co-founder José E. Feliciano in a statement. “We are very proud that … Clearlake was able to successfully improve operations, build out the leadership team and expand the business worldwide, consistent with our investment strategy.”

The divestment streak could be a sign that Clearlake is looking to raise a new fund. The firm closed its last fund – a $1.38 billion raise – in September 2015, almost exactly two years ago. Several industry sources said Clearlake could be looking to raise between $2 billion and $3 billion for what would be its fifth flagship fund.

A spokeswoman for Clearlake said no one from the firm was available for comment.

City National experienced widespread growth during the previous quarter with loans up 13 percent to $29.3 billion and deposits up 8 percent to $41 billion. Chief Executive Russell Goldsmith said in an email that he was pleased with the results and expected the bank would continue to execute going forward.

“City National had another remarkable quarter,” Goldsmith said. “Loans, deposits and assets all grew to record levels, and we continued to add clients and invest in new growth opportunities.”