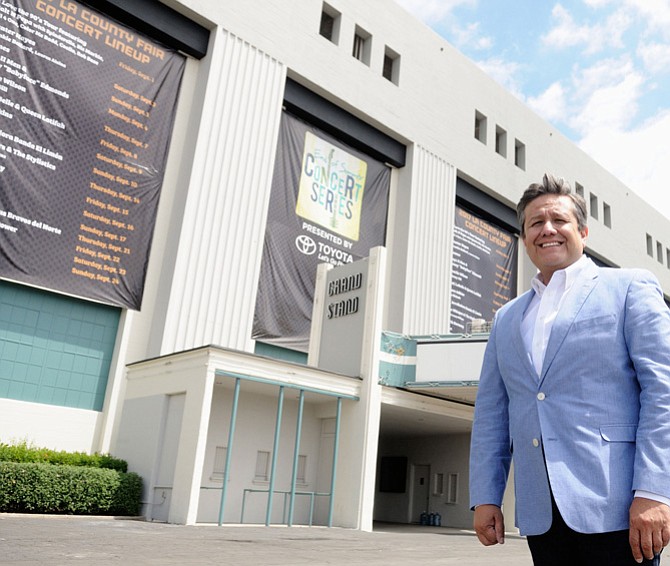 More than a million visitors go to Fairplex in Pomona every September to be entertained at the L.A. County Fair.

But the 487-acre property on the eastern edge of county has done much more than play host to Ferris wheels and fried ice cream.

It also has served as a year-round showcase for Southern California industries, culture and art for nearly a century – not to mention the hotel, conference center, and bar and grill owned by the Los Angeles County Fair Association, a nonprofit agency that runs Fairplex.

Its leaders are now in the process of developing a strategic plan to guide the property into the future.

“The question is what does the next 100 years look like,” said Miguel Santana, the new chief executive of the association. “Our mission will always stay the same. Our mission is going to remain about celebrating the things people are passionate about, strengthening the economy, developing entrepreneurship and commerce.”

Devising a strategy to accomplish that mission in a changing world is the task at hand for the association. Santana said it will include plans to develop the site’s land amid projections that more acreage will become available for new uses over the next decade. That’s largely based on expectations of reduced demand for parking spaces with the advent of driverless cars and a Gold Line light-rail extension that’s slated to reach the property over the next decade.

Fairplex officials have held a series of meetings with the community, business and elected leaders since March in order to come up with a strategic plan. They plan to release a first draft of the vision next month and to finalize the document by the end of the year.

Equestrian activities or even horse-racing activities also have the potential to make a major return, Santana said.

Another key idea, he said, includes a potential entrepreneur incubator site on the grounds, where would-be business owners such as chefs or engineers could come, pay rent and connect to like-minded people with their inventions, products or culinary ideas.

“It’s an emerging part of our economy because a lot of folks are developing their own businesses but don’t want the overhead costs associated with that,” Santana said. “You have a space, and all the equipment you need to create something is there. You basically rent the space and you don’t have to bring the equipment.”

Long-range goals for the organization, he said, include annual revenue growth for year-round events, increased visitor counts and the improvement of the Fairplex’s benefit to the local community and throughout the county.

Total revenue from Fairplex’s business units came in at $74 million in 2016, with $7.7 million in earnings. The association paid $2.9 million for rent, sales tax and interest to the county, she said.

The event’s early attractions included livestock exhibitions; a circus; and a horse-racing track, which made the fairgrounds a key venue for horse-racing from the 1920s until 2014, when events were moved to Los Alamitos Race Course in Cypress. The Fairplex is also a center of local art culture with the Millard Sheets Art Center, built by the federal governments Works Progress Administration in the 1930s to house art exhibitions produced for the county fair.

The fairgrounds became a hub for the burgeoning Southern California car culture in the 1950s when the National Hot Rod Association was founded and a drag strip was built there. The drag strip is still there on the west side of the property, and the Wally Parks NHRA Motorsports Museum to the southeast showcases about 100 cars of interest inside its walls.

The NHRA’s lease will expire in two years, but a representative of the organization said it hopes to continue that relationship far into the future. The group said it will work hand in hand with Santana on its future plan, with potential to continue educational and youth training partnerships.

“It’s a great relationship and we support Miguel with his strategic plan,” said Glen Cromwell, senior vice president of marketing for the NHRA.

Fairplex has continued to celebrate agriculture and livestock at the fair, and also has a signature learning center program called the Farm, which holds farm-to-table dinners and educational programs for the community.

The campus also hosts a career training center for youth, a child development center for local families, a 244-room Sheraton Fairplex Hotel and conference center, a soccer field, an RV park, and the Finish Line bar and grill restaurant.

The fair association hired Santana in January after a pair of controversies.

The Fairplex’s former chief executive, James Henwood Jr., stepped down from his post last year after a Los Angeles Times report on the association’s federal tax records revealed the former executive received more than $1 million in compensation in 2014.

Then a state audit in November concluded the county allowed the association to exclude hotel revenue from its rent calculation, relinquishing more than $6 million in rent from 2006 to 2015.

Santana, who was the city of L.A.’s administrative officer from 2009 until this year (see related Page 3 column item), said he wants the focus now to be on how to move Fairplex forward and continue a legacy of celebrating local industry while innovating for the future.

One idea, he said, is the potential opportunity for another hotel and mixed-use retail and housing development to add to Fairplex’s existing hotel and convention center.

Randall Lewis, principal of Upland-based Lewis Group of Cos., which has built a number of Inland Empire housing and commercial projects, said his company has expressed interest in the property over the past 20 years. Lewis said he’d be thrilled if the firm could play a small part in Fairplex’s future.

“It’s a fantastic piece of property,” he said. “It’s very well-located and it’s got enough scale that great things could happen there. Miguel and the board are bringing some fresh thinking, and they have a lot of good ideas for the potential of the Fairplex.”

Fairplex has made an enormous contribution to the quality of life in the region and that he often attends trade shows there to get business ideas, Lewis said.

“It’s safe to say they are a big contribution to the intellectual capital of the region because of the content they provide, not just during the fair season, but with the exhibits and trade shows that go on all year long,” he said.

“You have all these different groups and events on the fairgrounds, and they spend tons on marketing and people go there to spend money on transportation, with rental cars and hotels,” said Chris Thornberg, founding partner of Beacon. “You have to look at the impact with all of those parts. Miguel is overseeing a modern marketplace which is constantly shifting gears.”