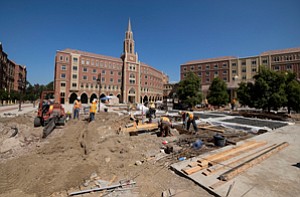 The student-housing hub called USC Village, one of the largest developments ever built in South Los Angeles, is set to open to fanfare Thursday.

The $700 million project over 15 acres at the corner of Jefferson Boulevard and Hoover Street is expected to house more than 2,500 students, according to USC. The development, which includes dining and shopping options such as Target and Trader Joe’s, is the university’s largest in its 137 years, officials said.

USC Village replaces the former University Village, an outdoor shopping center built on the site of a former meatpacking plant. Six buildings were constructed in three years, employing more than 5,600 workers – many of them local, according to a university release.

Some real estate experts see the project as a potential catalyst for development in surrounding neighborhoods.