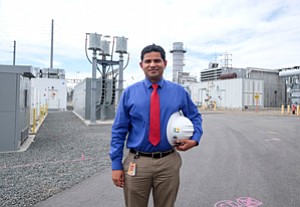 Gas-electric hybrid engines, which reduce greenhouse gas emissions and boost efficiency, have been popular in cars for years but are only now making inroads at power-generation plants.

Southern California Edison turned on the switch in March at battery storage units at two natural gas-powered peaker plants, which are used when there is peak demand for electricity. Each of the battery systems can store 10 megawatts of electricity, enough to power up to 9,000 homes, and, like their brethren in vehicles, have multiple environmental and conservation benefits.

The battery storage units, in Norwalk and Rancho Cucamonga, were built in partnership with General Electric. They will allow SCE, a unit of Rosemead-based Edison International, to save on natural gas usage, push power instantly to the grid, and provide a place to store excess solar and wind power. This should help reduce power outages in Southern California, SCE said, and might reduce costs, though whether customers will benefit in the form of lower prices is still unclear.

Kaushik said the utility plans to install the batteries at its three other peaker plants. Such facilities power up only at times of peak demand, such as hot summer afternoons when homes and businesses crank up their air conditioning.

It’s part of a much broader strategy to ramp up the utility’s energy storage capacity to comply with state requirements and the mandates to have one-third of its power from renewable sources by 2020 and 40 percent by 2030. As of the end of last year, roughly 27 percent of Edison’s total portfolio of 23,000 megawatts came from renewable sources, including wind, solar, geothermal, and hydropower.

With almost all of these renewable sources generating electricity on an intermittent basis, battery systems are key to storing excess energy when it’s generated and then releasing it to the grid as needed. As of the end of last year, SCE had under contract the ability to store more than 400 megawatts of electricity in batteries. Some capacity is in giant battery complexes, which include a lithium-ion battery facility in Tehachapi and a joint system with Tesla Inc. in Mira Loma that was completed this year.

Just as with gas-electric engines in hybrid vehicles, this hybrid power system blends output between the battery and a gas-powered turbine. The energy storage capacity of the battery was designed to provide electricity for long enough to allow the gas turbine to start and reach its designated power output.

A key benefit is that the battery power can be deployed quickly, in seconds rather than the 10 to 15 minutes it takes for the natural gas generator to come on line. The longer lead time for traditional peaker plants can be a liability when a transformer blows or demand spikes suddenly, occasionally leading to power outages or brownouts.

Just as in a hybrid vehicle, once the natural gas generator kicks in, some of the electricity goes toward recharging the battery.

SCE’s Kaushik said that in some instances when there’s a short-term spike in demand, only the battery power might be required, and the natural gas generator might not even need to be activated. That saves on natural gas usage, which has been a key concern since last year, when a massive leak at the Aliso Canyon natural gas storage facility shut off much of the region’s natural gas supply.

Another benefit, especially when more of these battery units begin operating, is providing a place to store excess wind and solar energy as it’s generated. Because wind, especially, is so variable and intermittent, there’s little ability to plan ahead to accommodate the extra power on the grid – unless there is enough battery storage capacity to handle it.

Whether SCE will be able to save money depends on how much the battery units cost to install, and on that front, Kaushik said he could not release the cost due to a confidentiality clause in the agreement with General Electric.

The lack of cost disclosure is of some concern to ratepayer advocates, who said that if this technology actually results in cost savings for SCE, those savings should be passed on to consumers.

“While we don’t know what the cost actually is, we’re fairly sure ratepayers will pay for the battery storage, so when will they see the promised savings?” said Mindy Splatt, spokeswoman for the Utility Reform Network, a San Francisco nonprofit.

Splatt noted that SCE has its next three-year rate case pending before the state Public Utilities Commission.

“Could these cost savings be applied to this current case? Or is this cost savings simply too speculative right now?” she said. “We simply don’t know.”