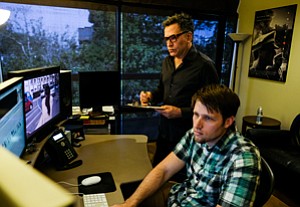 It’s not uncommon these days to see movie theater patrons scooting in 10 or 15 minutes later than the listed screening time, scrambling over other guests in the dark.

While it’s possible the latecomers at high-end locations such as Arclight Cinemas are not fussed about showing up late because they have a guaranteed seat, many moviegoers might have already seen trailers and other teasers online, so they have less interest in seeing them before a movie.

As a result of this growing phenomenon, trailer producers are busy devising new – and shorter – promotional content to market films on Instagram, Snapchat, and other social media platforms.

While the term “trailer” has survived through the digital age, they used to be shown at the end of the movie. The name stuck even as theaters began showing them before features. But times are changing.

“With everything being presented pretty much digitally, it’s changing the game dramatically,” said Brubaker.

While it’s hard enough for trailer producers to tell a story in the traditional 2½-minute version, they now have to figure out ways to engage audiences in online teasers that might last 10 seconds – or less.

Neil Goetz, president of Hollywood’s Engine Room, which produces trailers and other entertainment marketing campaigns, said the digital world is demanding material that can communicate even without audio. Social media marketing campaigns are also launching earlier on all platforms. Content for a highly anticipated blockbuster, he explained, could begin rolling out as much as a year and a half in advance.

“It’s starting earlier because in the summer we have nothing but blockbusters,” Goetz said. “A movie of that high level of pre-interest necessitates an early teaser trailer.”

Doug Brandt, chief executive of entertainment ad agency Ant Farm in the Fairfax District, said the company started work on trailers for the upcoming June release “Transformers: The Last Knight” in September. The bigger the movie, the more likely a trailer producer will begin working with a studio marketing department as early as possible – even from the beginning of preproduction.

Online content is pulled from the movie, which might or might not be completed by the time trailer producers get to work. That’s why it might look markedly different from the traditional trailer shown in theaters.

“You used to save your big thing until the end – your big crash, your big leap across the chasm,” said Goetz. “Online, you want to put your cliffhanger at the beginning, because (viewers) have such a short attention span.”

The amount of pressure placed on trailer production companies by studios to produce memorable content has also increased, he said.

“If (your movie) is coming out in the middle of summer, and there have already been three blockbuster flops, the bar gets raised,” he said.

In order to capture an audience primed for disappointment, trailer makers “have to be that much better in terms of intensity and creativity. Your crash better be more fabulous,” he added.

Engine Room’s Goetz said producers are still making 2½-minute trailers for theater exhibition, though they are often cutting additional short spots from the movie material. While prices vary, he estimated that an order including a long trailer, a teaser, a TV spot, and a piece of key art for a poster or other use might cost a minimum of $250,000 – and that’s not including material designed for social media, costs for which vary widely.

Producers of $100 million-plus films are more likely to run up expenses by asking for extensive audience research as well as multiple changes and additions, Goetz said, noting they’re also more likely to roll out several different trailers leading up to opening day.

Ant Farm’s Brandt said many producers of big-budget films hire more than one company to cut a trailer – up to five at times – and then choose a favorite. Sometimes a studio opts to create what Brandt calls a “Frankenstein trailer,” combining efforts from several companies into one package.

Despite the potential for increased business for trailer producers, more consumers choosing to watch trailers outside of the movie theater is disconcerting for smaller theater chains such as West L.A.’s family-run Laemmle Theatres.

“For us, trailers are a huge factor,” said Greg Laemmle, the company’s president. “Most (art-house filmmakers) don’t have the ability to get in front of likely moviegoers through these other means. In-theater play is vital.”