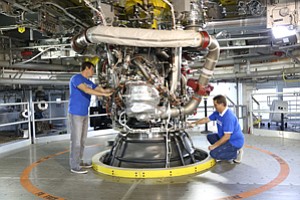 It’s easier to launch a rocket when it weighs less.

Aerojet Rocketdyne Holdings Inc. – whose engines and propulsion systems have been a part of every manned mission since the U.S. space program first took flight in 1959 – has decided the best way to chase rivals SpaceX and Blue Origin is to lighten its load by shedding the company’s old business model.

Entering the second stage of a six-year cost-cutting program, the storied business said this month that it would eliminate or relocate 1,100 jobs from a rocket manufacturing plant in Sacramento by the end of next year, shifting about 700 jobs to a facility in Huntsville, Ala., and about 100 jobs to the company’s headquarters in El Segundo.

“You can’t just throw dollars at problems anymore. You have to be really affordable,” said Paul Lundstrom, Aerojet’s chief financial officer, who joined the company in November after nearly 20 years in finance roles at Hartford, Conn.-based aircraft parts manufacturer United Technologies Corp. “What we are trying to do is change the business model.”

The company is selling off land, reducing its workforce, and working on streamlining its manufacturing processes using new technologies such as 3-D metal printing in an attempt to keep pace with upstarts such as SpaceX, officially Space Exploration Technologies Corp., which are reinventing aerospace business models.

The company projects that the cost-savings program, launched in 2015, will save $230 million annually when completed by 2021. But the strategy is already showing results. Aerojet reported net income of $18.1 million for the year ended Dec. 31, a marked turnaround from a year-earlier loss of $16.2 million. Its share price has risen 23.6 percent since the beginning of 2015 to close at $22.43 on April 19.

But competition in the rocket industry is fierce. More than 40 startups worldwide, including local players Virgin Galactic and Rocket Lab USA Inc., are developing launch technologies that could increase competition further, said Phil Smith, a senior analyst with Bryce Space and Technology, an Alexandria, Va.-based analytic consulting firm for the aerospace industry. And that’s in addition to established launch service providers.

“The older companies, even though they have a legacy, have to adjust,” he said. “The issue becomes: Who is going to survive from this?”

Aerojet has been in the rocket business since the dawn of the space race, supplying rocket engines for not only manned American space flights, but also for the voyages of every unmanned NASA spacecraft that has explored the solar system.

Despite its strong pedigree, the company’s position in the rocket industry has been on shakier ground in recent years.

One of its main rocket engine customers, United Launch Alliance of Centennial, Colo., has lost market share to less-expensive upstart SpaceX in the last five years.

SpaceX’s costs are substantially lower because it builds more parts in-house and reuses engines. The cost to SpaceX of launching its Falcon 9 rocket is $62 million, compared with about $109 million for the launch services of ULA’s Atlas V. In addition, SpaceX projects its ability to land and reuse Falcon 9 rockets will eventually reduce prices a further 30 percent.

ULA has responded by attempting to compete on cost when bidding to provide launch services to commercial satellite customers, NASA, and the U.S. military, said Bill Ostrove, an aerospace and defense analyst with Forecast International Inc. of Newtown, Conn.

Elon Musk’s Hawthorne-based business isn’t the only competitor giving Aerojet a run for its money. The company was also dealt a blow in 2015 when ULA, its longtime customer, chose rival Orbital ATK Inc. of Dulles, Va., to provide solid-rocket boosters for the Atlas V and its forthcoming heavy-lift Vulcan.

“It went to Orbital ATK on price,” said Aerojet’s Lundstrom.

While Aerojet does still sell rocket parts to ULA, that company’s chief executive, Tory Bruno, also publicly declared upstart Blue Origin, backed by Amazon.com Inc. billionaire Jeff Bezos, as the frontrunner to supply the Vulcan’s first-stage rocket engines. Blue Origin’s BE-4 engine is priced 40 percent less than Aerojet’s product, according to ULA, though the exact price has not been disclosed.

“It certainly puts pressure on the business and you have to react,” Lundstrom said. “We need to be as affordable as possible.”

Aerojet made a $2 billion offer to acquire ULA in September 2015 in an apparent effort to vertically integrate itself. But ULA’s co-owners, Boeing Co. and Lockheed Martin, rejected the offer.

Aerojet initiated its cost-cutting plan in March 2015 with the goal of consolidating operations within fewer facilities and streamlining manufacturing. For example, the company is trying to use 3-D metal printers to build one-off parts faster and cheaper than traditional methods.

It is also trying to increase its revenue from military sources, Lundstrom said. In February, the company agreed to buy Coleman Aerospace of Orlando, Fla., for $15 million in cash from L3 Technologies. Coleman contracts with the U.S. Missile Defense Agency and other military departments to repurpose old ballistic missiles for target practice. The company is projected to generate about $40 million in revenue this year.

“We certainly like the tone we are getting from this administration on defense and space,” he said.

By balancing one foot in the commercial sector and another in the military sector, the manufacturer might be able to better weather economic downturns in either one, Forecast International’s Ostrove said.

“Defense is cyclical, just as commercial is cyclical,” he said. “The hope is they will be on different cycles.”

“Small companies would pay a premium to manage their schedule as they see fit,” he said.

Aerojet sees its military and commercial businesses eventually feeding off each other, Lundstrom explained.

“At the end of the day, it’s booster engines on ballistic missiles,” he said. “There is some tech synergy between the space launch business and missile business.”