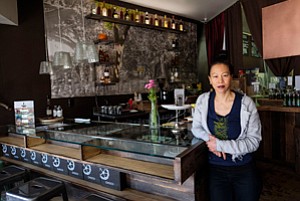 The Easter Bunny might leave some extra treats in local retailers’ baskets this year.

The holiday falls on April 16, an unusually late date, and as a result is expected to translate to record consumer spending on candy, clothes, decorations, and other items, according to the National Retail Federation.

The group is predicting that year-over-year sales in the United States will rise 6 percent to $18.4 billion, up from $17.3 billion last year.

The extra time means more time for purchases, according to the federation, which surveyed more than 7,400 consumers in the first week of March.

Patricia Tsai, owner of Chocovivo, a “bean-to-bar” chocolate factory and retail shop in Culver City, said she expects to see more business over Easter weekend, despite not doing anything special for the holiday.

“We don’t make Easter bunnies,” she said. “(But) we usually have a small spike.”

Tsai estimated that spike would translate to a 10 percent increase over her average daily sales of $1,000.

Nearly 89 percent of consumers plan to buy candy this year, and the category will generate $2.6 billion in sales, according to the retail group.

Discount stores are expected to be the big winners, with more than 58 percent of planned purchases. Commerce-based 99 Cents Only Stores, owned by Century City’s asset manager Ares Management and Toronto’s Canada Pension Plan Investment Board, has been advertising itself as a one-stop shop for the holiday on billboards around town and on its website, where sample Easter baskets are featured.

A smaller number of consumers, about 25 percent, plan to shop at specialty stores, including greeting card and gift shops, the federation said.

Limonaia, a gift store in Santa Monica, usually has a bump in sales around the holiday, according to sales employee Jessica Varella.

“We’ll maybe do a little better than last year,” Varella said. “Every Christmas and other holidays we do a couple thousand more than the year before.”