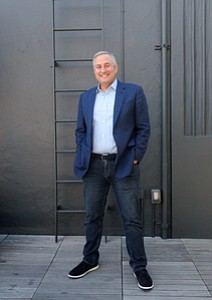 As a managing partner at Santa Monica’s tech-focused Upfront Ventures, Mark Suster is responsible for the company’s $1.6 billion in investments. Upfront was among the first investors in multichannel YouTube network Maker Studios, which sold to Walt Disney Co. for $675 million in 2014, and an early investor in online car shopping system TrueCar Inc., which went public that same year. Suster built and sold two companies, BuildOnline, a maker of cloud-based project management software for construction projects, and the Bay Area’s Koral Technologies Inc., a content collaboration company that Salesforce.com acquired in 2007. Upfront was an investor in the latter, and managing partner and co-founder Yves Sisteron recruited Suster to join the firm in 2007. He became a managing partner in 2011 and takes care of the day-to-day operations of the 25-employee firm. He maintains an active social media presence and publishes a blog, Both Sides of the Table, about the world of venture capital.

Given your tech background, why stay in Los Angeles?

I came to L.A. for two years in 2007. I was going to open up a Silicon Valley practice for Upfront. But nine months in, I saw that would be crazy. I saw an emerging tech ecosystem here but almost no venture capitalists.

What do you think about the L.A. tech scene now?

What interests me about L.A is I think Silicon Valley took L.A. for granted for decades. What you have to realize is we created the monetization of the internet in L.A.

What was that progression?

Look at how most money is made on the internet. Most of it is made by Google and Facebook. And mostly in Google it’s made through sponsored search. But Google wasn’t the company that innovated it. It was innovated in town here by a company called Overture (Services Inc.). It sold to Yahoo for $1.6 billion dollars. It didn’t become Google, but Google copied them.

How did L.A. get to this place?

If you look at commerce, we are the people who not only figured out how to make money on the web, but Bill Gross (of Idealab), who created Overture, now has launched, like, 30 businesses. Gil Elbaz, after he left Google from Applied Semantics, created a new company we backed called Factual. From the ashes of the companies that came before us – Myspace spawned 11 startups – the people who saw scale went on to do their next company.

And you think that will happen again?

You have Riot Games, Snapchat, Tinder, Maker Studios, Dollar Shave Club. You take this pool of people in the next three to next 10 years, they’re all going to go on to create companies. And they’re not going to do it in San Francisco. You don’t live six years in Venice Beach and move to San Francisco.

How does Upfront fit into the picture?

We think the next 10 years are going to see an explosion of startups. We’re the oldest VC in L.A.; we’ve been around for 21 years. We’re the largest VC in town. We have $1.6 billion under management; that will soon top $2 billion. We put about $100 million to work every year in L.A. companies.

So it’s important to you to nurture local companies?

If we don’t reinvent industry in L.A., it will happen up north. And that’s why it’s important to have local investment dollars. We actually created a hashtag called #LongLA. My partner Greg (Bettinelli) came up with the idea. It actually is his license plate.

How much of your money do you invest in L.A. companies?

About half our money we invest locally, 25 percent is in Silicon Valley, 15 percent in New York, and the balance is in other locations.

Are there any investments you regret passing on?

I’ve been a VC for 10 years. I only regret one deal. Snapchat, of course. I didn’t pass on Snapchat – we didn’t look at Snapchat. When they first wanted to raise money, there were a million companies like them and they were known as a place for young people to share risqué pictures. As VCs, we care about the social implications of what we do. So we had some concerns about it.

Do you think Snap will live up to its hype?

You don’t think it is?

I think it has changed how our industry works, so whether it’s valuable 10 years from now or not, no one can say. But when the world’s most successful internet company, the fastest-growing company in history, is copying everything they do, that should tell you a lot.

How much of a problem does Snapchat pose for Facebook?

When Google started, everyone said, Well, newspapers have tons of money and they’ll be able to protect their advertising business. How’d that work out for newspapers? The whole idea of startups is that they disrupt industries by creating products that are 10 times better and much cheaper in

price and make it hard for the other people to compete.

What did Snapchat disrupt?

Snapchat changed the way people design and build applications. The idea that I open the application and my camera is on – that was heresy. The idea that I’m creating ephemeral content, in a world where Facebook was saving everything, was heresy. So many parts of Snapchat innovated, whether filters, streaks, stories, an amalgamation of a 24-hour time line, whether it’s vertical video rather than horizontal video.

Do you think Los Angeles will take the crown of Silicon Valley?

No. We don’t need to (in order) to be successful. We just need to create a lot of innovative companies that create new industries, new products, and a lot of new jobs. (Silicon Valley has) been doing this more than 40 years.

All the great digital media companies are being built here. It’s why all the great virtual reality and I think most great augmented reality companies will be built here. You have writers, directors, storytellers, actors, postproduction, special effects, sound, people who understand how to package and sell advertising. Those skills don’t exist in Silicon Valley. And we don’t always need to compare ourselves by that yardstick. The jobs may have moved up north in the past for startups, but they don’t anymore.

So we’re competing for the same talent now?

We don’t need to match Silicon Valley to be a great city. And I don’t think we need to be derivative of Silicon Valley. L.A. is L.A. That’s why we call it “L.A. tech.”

You’ve kept your blog for about a decade. Is branding important for a VC?

I don’t think of it as personal branding. I’m competing for one thing: share of mind. I want to be on your radar if you’re thinking about raising money. If I can control share of mind, I’m much more likely to win deals when I want to compete for the most competitive deals.

Has being outspoken on your blog and Twitter about President Trump and Peter Thiel come back to bite you?

I’d say the opposite. I feel like I found my tribe. Trump crossed the line with me.

I think most people don’t feel comfortable speaking publicly about a lot of these topics and yet they feel good that someone else did. I got thousands of messages from people thanking me for speaking out not just against Donald Trump but against Peter Thiel.

Peter Thiel is an immigrant. He’s from Germany. How about Elon Musk? He’s an immigrant. Immigration has been nothing but good for America. We’ve always been a beacon for the smartest, brightest, hardest-working people who want to come somewhere to feel like they’re free. If you’re willing to get on a stage for somebody who so clearly is race-baiting, at some point someone needs to call bullshit on you. So I did.