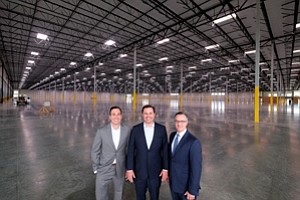 United Parcel Service Inc. has signed one of the largest industrial leases in Los Angeles County, taking 525,400 square feet at a new Compton warehouse in a deal valued at more than $44 million.

The deal, for half of the recently completed Brickyard development, comes amid ongoing demand for large infill warehouse and distribution space near major transportation hubs as e-commerce businesses continue to expand.

“People want the ability to have a large building right near so many people, and rarely has that been possible,” said Bret Quinlan, an executive vice president at CBRE who is marketing the site for owner Clarion Partners.

In fact, it’s extremely rare. The Brickyard is the biggest modern industrial site in the South Bay area, where the average large building is 100,000 square feet, Quinlan said. It is hitting the market at a time when L.A.’s industrial vacancy rate is 1 percent, according to CBRE’s second quarter data.

While the building shell is complete, UPS will still need to build out its interior, a project expected to be finished late next year. When completed, the operation will be able to accommodate 300 trucks and will be among the biggest of the company’s 32 sites in Southern California; the largest, at 900,000 square feet, is in Ontario.

UPS plans to use the Compton location for small package delivery throughout Los Angeles and Orange counties.

“Expanding in Compton puts the UPS delivery fleet closer to this growing demand,” Tom Cuce, president of the UPS Southern California district, said in an email.

The shipping company’s need for extra space is being fueled by the boom in online shopping. E-commerce sales nationwide in the second quarter grew about 16 percent compared with the year-earlier period, according to Bloomberg.

“Companies like UPS want to change their networks to feed where the packages are going,” said Lee Klaskow, a senior transportation analyst at Bloomberg Intelligence. “It’s about how many packages you can put on a truck and how few stops you can make.”

The nearly 60-acre site, at Central and Rosecrans avenues, was home to a brick manufacturing facility for the now-defunct Atkinson Brick Co. from 1934 until it shut down in the early 2000s.

Trammell Crow Co., a Dallas-based subsidiary of CBRE, bought the site with Des Moines, Iowa-based Principal Real Estate Investors in 2014 for $37 million, or $14.40 a square foot, according to property records.

Then began the challenging process of securing entitlements, remediating the soil, and designing a project that could compete with sprawling new facilities in the Inland Empire.

“No one wanted to expose themselves to any risk,” said Trammell Crow Managing Director Greg Ames. “We spent hundreds of hours making sure we understood every last detail of the property.”

The site is divided between two nearly identical warehouses; one of 525,400 square feet and the other of 481,600 square feet. The buildings have ceilings taller than 36 feet and nearly 200 dock doors.

As a condition of construction, Trammell Crow signed a Community Benefits Agreement with the city, spearheaded by Mayor Aja Brown, requiring that 35 percent of full-time employees at the site be city residents. UPS expects to employ 160 full-time staffers within five years of opening. In addition, Trammell Crow pledged $1.3 million to local public agencies and job programs.

Clarion, based in New York, got wind of the Brickyard’s potential last year. It had owned industrial properties in Commerce, Santa Fe Springs, Ontario, and Redlands, but nothing close to L.A.’s city center. It purchased the site from Trammell Crow and Principal Real Estate Investors in December; terms of that deal were not disclosed.

“We had been looking forever, and we finally saw this opportunity and jumped on it,” said Ryan Collins, a vice president at New York-based Clarion. “It is a unique opportunity to find such a large space in a constrained market.”

It also worked well for Clarion to take over the venture once Trammell Crow had secured entitlements, mitigating the risk of jumping into a huge project built on spec.

Collins said the proximity to the ports 10 miles away and Los Angeles International Airport seven miles away was also a big selling point.

As part of the lease negotiation, UPS agreed to buy at least $70 million worth of equipment in Compton. In return, the city agreed to waive 30 percent of the company’s city taxes for up to 10 years.

The lease is among the 10 largest in Los Angeles and a rarity as space for large facilities has been gobbled up.

As a result, developers have targeted infill properties whenever they can.

Bridge Development Partners purchased a 300,000-square-foot building in Torrance from Farmer Bros. Coffee, which is relocating to Texas, in July for $43 million. Bridge plans to replace the 56-year-old Class B site with a 510,000-square-foot facility.

The San Gabriel Valley saw one of the biggest industrial sales in recent years when a newly built warehouse of 168,000 square feet sold this month for $29 million to AFL-CIO Building Investment Trust – $23 million more than last year’s sales price for the aging buildings previously on site.

“It’s happening more and more because there’s more demand for state-of-the-art buildings,” she said at the time of the deal. “You’re forced to tear stuff down because there’s no land left.”