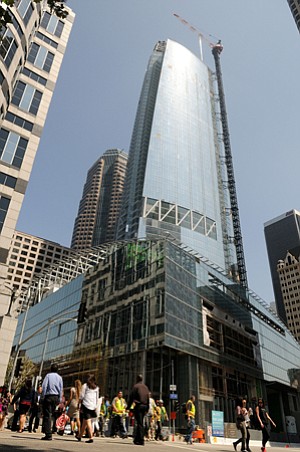 The Wilshire Grand Center just became the tallest building in the West, capped last week by a spire that pushes the 73-story tower to 1,100 feet.

Yet, for all the buzz surrounding the anticipated debut next spring of downtown’s first new skyscraper in 20 years, leases for the 365,000-square-foot office component have yet to get inked.

“Typically, when a building is at this stage, they would expect to have an anchor tenant in there by now and significant leasing,” said Steven Kolsky, an executive vice president at commercial real estate firm Newmark Grubb Knight Frank’s Century City office. “I think they have their work cut out for them.”

Steven Marcussen, an executive director at Cushman & Wakefield handling the Wilshire Grand’s leasing, said building owner Korean Air Lines Co. Ltd. is expected to lease one floor of the 18 stories of office space. No other major tenants have been signed.

Filling the office portion of the tower might take some time. Downtown closed the second quarter with 4.9 million vacant square feet, and the Korean Air tower will add 7 percent to that tally. The vacancy rate downtown, while improving over recent quarters, was above 16 percent in the second quarter. While the submarket has posted positive net absorption, with more space coming off the market than being put into the rental pool over the last few periods, the second-quarter figure of less than 70,000 square feet was nominal for a 30 million-square-foot submarket.

“They’re offering a lot of office space, and that market hasn’t had very strong net absorption,” said Tomas Schoenberg, executive vice president of investments for San Francisco-based Swig Co., which owns an office building near the Wilshire Grand. “It’ll be a challenge to get it leased up. They are in need of a major user to take a big chunk.”

But Marcussen said Korean Air is in no rush to sign office deals. As both developer and landlord eyeing a long-term hold, the company would rather hold out for a top-notch roster of firms.

“We’re going to put just the best tenants in the market into this space,” he said.

Korean Air began construction on the $1 billion project in 2014 after tearing down the former Wilshire Grand, a hotel and office center built in 1952. The Seoul-based company owned by Cho Yang-ho’s Hanjin Group initially planned to construct a pair of towers – one a 1.5 million-square-foot office tower, the other a hotel and condo complex. But by the time blueprints were ready in 2011, the recession had crimped demand for office space. Korean Air regrouped and tapped downtown architecture firm A.C. Martin for a new design, putting hotel rooms and offices into one sleek tower.

Set for a grand opening in March, the Wilshire Grand is divided into three chunks: a multilevel parking structure; 18 floors of offices; and 38 floors of hotel space operated by InterContinental Hotels & Resorts, including 900 rooms and a lobby on the 70th floor. A restaurant will crown the building while a 35,000-square-foot plaza will sit below, feeding into Seventh Street at Figueroa Street. The building is aiming for a LEED Gold certification for energy efficiency and is designed to let in fresh air on each floor.

Marcussen said he expects these features will attract companies from both downtown and farther afield, adding that his strategy is to snag an anchor tenant for as much as half the space, then assign medium-size tenants that would need about two floors each.

Price and competition aside, the tower faces another challenge: Skyscrapers have gone out of vogue in recent years. Landlords and tenants are now aiming to ditch the corporate aesthetic with dramatic office makeovers, while developers are building low-slung campuses amid shops and eateries, as in Playa Vista. Offices springing up in old factories and warehouses in downtown’s Arts District are set to soon offer roughly 2 million square feet at rents on par with the Wilshire Grand.

“The hot product is more of the creative, repurposed office,” said CBRE Senior Vice President Chris Caras. “But this is going to be new. It’s going to be a beautiful showpiece.”