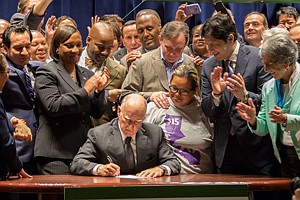 Business interests did not fare as well this year in Sacramento as in recent years, with the state Legislature passing several potentially costly bills.

From a hike in the minimum wage to $15 an hour and expanded parental leave to increased farmworker overtime and stricter greenhouse gas emission limits, lawmakers pushed through a progressive agenda – over the strenuous objections of California’s major business groups.

“For an election year, this was one of the most regressive legislative years against business in a long time,” said Tom Scott, executive director of the California chapter of the National Federation of Independent Business, which represents small businesses.

It could have been much worse. Out of two dozen bills that the California Chamber of Commerce dubbed “job killers” throughout the legislative session, business lobbying of moderate Democrats stopped 19 by session’s end, including a bill to add members to the South Coast Air Quality Management District and a bill that would have required employers to pay double rates for employees who work on Thanksgiving.

Historically, that’s about average for stopping job killers. But the ones that got through were more sweeping in their potential impact than in previous years, led by the statewide minimum-wage increase to $15 an hour by 2022 and the greenhouse gas emission reduction bill, SB 32.

The greenhouse gas bill sets new targets for greenhouse gas emissions to 40 percent below 1990 levels by 2030; legislation enacted a decade ago already required state emissions to reach 1990 levels by 2020. That target was being reached largely through a market-based emissions credit trading program overseen by the California Air Resources Board, and the new law puts meeting the stricter requirements in that agency’s hands again.

“This bill gives the Air Resources Board unchecked authority to increase costs on manufacturers and our economy, threatening manufacturing jobs, expansions, and other investments,” Dorothy Rothrock, president of the California Manufacturers & Technology Association, said in a statement. “We urge the Governor to veto this bill so we can start over and get it right.”

While there are only a small number of farmworkers in Los Angeles County, one of the largest farming operators in the state – Paramount Farms International – is owned by billionaire couple Stuart and Lynda Resnick and is headquartered in West Los Angeles.

“This litigation threat is just as serious for small-business owners as the cost of actually providing the leave,” the business federation’s Scott said.

It wasn’t all bad news, of course. Among the bills that business interests successfully fought off was one to restructure the board of the South Coast Air Quality Management District. After local Republican elected officials gained a majority on the air pollution control board last fall and publicly stated their intention to make the agency less onerous to business, Senate President Pro-Tempore Kevin DeLeon, D-Los Angeles, introduced a bill to add three members to the board as a “balance.” Despite DeLeon’s clout, that bill collapsed in the closing hours of the legislative session.

Business interests were also able to get amendments into a few bills to make them less onerous. One example, according to Gary Toebben, chief executive of the Los Angeles Area Chamber of Commerce, was SB 1234, the California Secure Choice Retirement Savings Program that sets up a state-run retirement program for workers at private companies. That bill, also carried by DeLeon, was amended to shield employers from liability for employees’ investment choices in the retirement program.

And a handful of bills that businesses supported did pass. Among them was a bill to protect employers from lawsuits under the Americans With Disabilities Act if they make fixes to their workplaces within 15 days of being notified; currently, even if employers make the fixes, they can still be sued.

Toebben also cited a bill extending the time period under which the environmental review process for “megaprojects” is expedited.

This was one of a “number of bright spots for the Los Angeles business community,” Toebben wrote in his weekly blog at the end of the legislative session.