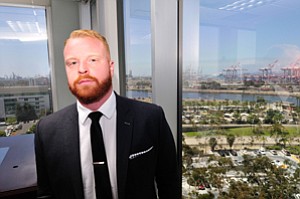 It’s an astounding number: as many as one in five workers in Los Angeles County – upward of 1 million people – work in nontraditional jobs, either as self-employed or contingent workers or as part of the underground cash economy.

These workers can be found everywhere – from writers, actors, and postproduction specialists in the entertainment industry to truck drivers at the ports, real estate agents, gardeners, and a small but growing contingent of workers with “gigs” in the sharing economy.

Indeed, with its concentrations in the creative/entertainment industries and the goods movement sector, the county is one of the leading centers in the nation for these nontraditional jobs. U.S. Census Bureau figures show the county has a slightly higher percentage of self-employed positions than California and roughly 50 percent higher than the national average.

“If California is on fast-forward, then L.A. is on steroids when it comes to the contingent workforce,” said Manuel Pastor, professor of sociology, American studies, and ethnicity at USC’s Dornsife College of Letters, Arts and Sciences.

For those seeing the glass as half-full, a major factor behind the huge number of self-employed workers is L.A.’s reputation as a magnet for immigrants-turned-entrepreneurs. Many immigrants who start out on their own eventually progress to open their own businesses.

“Southern California is thought of as hotbed of entrepreneurship; this high percentage of self-employed aligns with that,” said Robert Kleinhenz, an economist with Beacon Economics in Los Angeles and former chief economist with the Los Angeles County Economic Development Corp.

“When not putting workers on payrolls becomes the dominant model in a geographic area or industry, it’s hard for workers to break out of that,” said Dan Flaming, president of the Economic Roundtable, a downtown nonprofit research organization with ties to social justice groups.

By its very nature, contingency and self-employed work is hard to track. Estimates vary, starting on the low end at about 430,000 workers in the county, or 9.3 percent of a workforce of 4.5 million, which is based on the Census Bureau’s most recent American Community Survey of self-employed in 2014. That puts Los Angeles 50 percent higher than the national average of 6.1 percent.

Beacon’s Kleinhenz said the Census Bureau data does not include sole proprietors who have incorporated their own businesses. He said factoring those workers in could add as many as 400,000 to the ranks of the contingency/self-employed, putting the total closer to 830,000.

The Economic Roundtable’s Flaming goes even higher. He cites data from the U.S. Bureau of Economic Analysis that show more people working in the county than other government agencies have tracked, with the vast majority of those additional people not showing up on employer payrolls. As a result, in a 2013 report for a local carpenters union, he put the number of contingency/self-employed workers at about 950,000, or roughly 19 percent of the total workforce.

Flaming said that percentage had grown from about 17 percent when he looked at the issue a few years earlier and that it is likely still creeping up.

And none of these estimates completely accounts for workers in the underground or cash economy, such as many gardeners and housekeepers, or those involved in illicit trades such as selling drugs and prostitution.

Whatever the number, it’s having a substantial impact on the local economy. One major characteristic of self-employed or contingent workers is that the work is temporary in nature: They move from project to project, client to client, or even job to job. And that can create a more unstable workforce that is less willing to commit to major purchases such as homes.

“In many cases, there is a greater amount of uncertainty about your livelihood and your household’s financial well-being,” Kleinhenz said.

This is most acute, he said, among workers who have become part of the self-employed/contingency workforce involuntarily, either through being laid off from traditional full-time payroll jobs or working in industries where such jobs are scarce.

The other major characteristic is that these workers are generally responsible for paying their own taxes and benefits. That can make the final “take-home” paycheck smaller than one from a payroll job.

“Our social systems are not well-geared toward this new evolution,” said USC’s Pastor. “Employees who receive 1099 forms are not eligible for unemployment insurance, they have to rely on Obamacare and they generally can’t even invest in the company 401(k) plan.”

Of course, not all workers in this segment are struggling. Real estate agents selling high-end homes, A-list actors, and professionals with high-end clientele can take home hefty payouts and can enjoy some of the freedoms, such as setting their own hours and working conditions.

One reason the county has become a leader in this contingent/self-employed workforce is the dominance of two industries that rely heavily on this model: the entertainment sector and goods movement.

The entertainment industry gradually adopted this model as the old studio system broke down in the 1960s and 1970s, with actors, writers, and directors essentially becoming independent contractors. It spread to production and postproduction houses as well as other “below the line” workers.

A 2015 report on the creative economy from the Otis College of Art and Design in Westchester found there were 166,000 “nonemployee establishments” in L.A.’s creative economy, with the vast majority of those in the film and TV sector.

“We’re seeing this number of contingent workers increase, particularly at smaller companies because it’s less overhead,” Kathleen Milnes, chief executive of the Entertainment Economy Institute and a professor of digital media at Otis. “It’s an efficient and cost-effective way of running a business that has huge swings in work.”

In the goods movement sector, the independent contractor model is especially widespread among truckers operating at the ports of Los Angeles and Long Beach. The model got a jumpstart at the ports after the trucking industry was deregulated in the 1980s. Weston LaBar, president of the Harbor Trucking Association in Long Beach, said 90 percent of the 12,000 truck drivers working at the ports today are independent contractors. He cited the same peak-and-valley factor for work as the reason the trucking companies have adopted this model.

“For a company, this allows them to flex up very quickly when a lot of cargo comes in, while avoiding drivers just sitting around when cargo is light,” he said.

He said most truck drivers prefer the independent contractor model because it offers higher take-home pay; some even use it as a way to acquire more trucks and start their own trucking companies.

It is a view that is hotly contested by union leaders, who say truck drivers make less money as independent contractors and that the trucking companies are skirting federal and state laws by keeping them as contractors instead of putting the drivers on their payrolls. The courts have sided with drivers seeking full-time status in a series of recent decisions, and some trucking companies have filed for bankruptcy protection as a result.

Another factor could reshape this contingent workforce, especially among lower-wage workers: the state and local increases in the minimum wage. The conventional view is that as the minimum wage increases, restaurants and other hard-hit companies might be more tempted to convert some or most of their workers to independent contractors to lower their costs, even if such a move would violate state and federal laws.

But the Economic Roundtable’s Flaming said the trend might go the other way, because along with the minimum-wage increases, the city and county of Los Angeles are setting up enforcement offices to make sure employers comply with the pay raises.

“Right now, federal and state agencies are so overwhelmed with complaints over misclassification that they are very slow to act,” he said. “I believe that as these local wage enforcement offices gear up, they will move more aggressively in this area and you will start to see employers who had been classifying their workers as independent contractors put them back on their payrolls.”