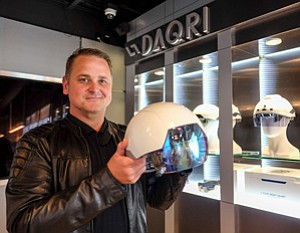 When Daqri launches its updated Smart Helmet next month, the company is banking on its augmented reality headset finding a real audience after five years in development.

Chock-full of technology that provides it a wider field of view and more dynamic display while using lighter carbon-fiber components, the downtown company has focused on marketing to industrial users, who can use the product’s ability to keep a variety of workers better informed by overlaying text and graphics onto its heads-up display.

“It empowers workers with augmented reality to make better decisions in the workplace,” said Brian Mullins, Daqri’s chief executive. “Using the Smart Helmet you can look at a piece of equipment and you will see step-by-step instructions overlaid in real the world.”

The largest user base for Daqri’s device, a hard hat with retractable lenses, is among field engineers, he said, noting that engineers might be responsible for hundreds of work activities but only perform a handful of them on a regular basis.

The firm’s augmented reality technology is being tested by companies such as General Electric, Siemens AG, and downtown’s Hyperloop One as a means to speed up the work of technicians in industrial settings.

But at $10,000 each, and with a complex setup process, the average industrial company might have trouble justifying the device’s benefits, said Todd Richmond, director of the Mixed Reality Lab at USC’s Institute for Creative Technologies.

“For certain niche applications, I think Daqri has a (return on investment) argument right now,” he said. “More broadly, no, but that will be coming.”

Mullins argued that there are a number of applications the device can do without much setup and that it continues to grow more capable. For instance, it contains an thermal camera within the helmet that can help workers see potential maintenance problems before they become expensive or hazardous.

“A bearing, seal, or rotating part, when the friction builds up before it breaks, it tends to accumulate heat,” he added. “With the naked eye it’s not really visible, but with the thermal camera you can actually see where the temperature has increased.”

Mullins and several of his co-founders reportedly met at USMetronics, a Boston company that invented an automated sentry gun and a robotic stone-cutting machine, before launching Daqri in 2010. Since, the firm has raised more than $130 million from investors, including $15 million from Newport Beach private equity firm Tarsadia Investments in June 2013 and an undisclosed investment from angel investor and musician D.A. Wallach, who sits on the company’s advisory board. Mullins declined to disclose where the company’s other funding came from. Daqri has about 350 employees.

Initially focused on the entertainment industry, Daqri launched its first product in 2011, an augmented reality publishing platform that superimposed an image or video over a smartphone camera’s video feed after scanning a QR code.

The company declined to disclose how many headsets it has sold, but it doesn’t generate much revenue from Smart Helmets, which are in use by a small number of customers participating in its pilot programs.

Instead, the company has sustained itself on venture capital and by making windshield heads-up displays for use in cars, hardware that is installed in 200,000 automobiles produced by Jaguar Land Rover Ltd.

To help keep pace, Daqri has acquired four businesses whose technologies have been integrated into the headset. Those acquisitions could help the company become the de facto standard, USC’s Richmond said, or they could help it draw the attention of “one of the 800 pound gorillas. Google could buy them or Facebook could buy them.”

One of Daqri’s customers, KSP Steel of Kazakhstan, uses the Smart Helmet to visualize metrics coming from steel pipe manufacturing equipment, foregoing the need for workers on the shop floor to gather information by walking to the control room.

“If people have the right information, they will make the right decision,” said Mullins. “Not having to run across the room to get a data point saves you time.”

Steven Feiner, a professor of computer science at Columbia University, agreed that augmented reality has been able to improve worker efficiency.

“High-quality augmented reality task assistance can result in people being able to perform tasks more quickly and having fewer errors than using conventional documentation,” he said. “You are looking directly at the task domain itself while doing the task, instead of looking at instructions on paper or even on a laptop.”