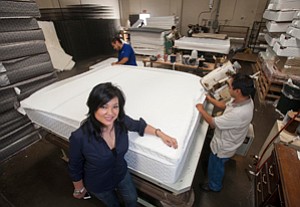 Three months after falling to their lowest point since 2011, shares of furniture maker Nova LifeStyle Inc. skyrocketed nearly 1,000 percent, closing at $4.30 on Oct. 19. They had traded as low as 39 cents on July 22.

But Nova’s ascent has come amid uncertainty and change for the company, giving its October ticker readout the look of a particularly rugged stretch of the Sierra Nevada.

The volatility has accompanied several big announcements by the Commerce-based company. Late last month, Nova announced it was selling its Chinese manufacturing interests for $8.5 million to a firm in that country. That news was quickly followed by the resignation of Chief Executive Ya Ming “Jeffrey” Wong, who is also the company’s largest shareholder, with a nearly 20 percent stake.

In a statement, Tawny Lam, Nova’s chairwoman and interim chief executive, said Wong’s decision to step down was a direct result of the decision to spin off the Chinese manufacturing subsidiaries.

“With the impending sale of our China business we appreciate Jeffrey’s desire to seek other opportunities and we wish him well in his future endeavors,” she wrote.

Nova attributed the sale of its Chinese manufacturing interests to the slowing Chinese economy, increased labor prices in that country as well as a desire to focus on “designing, developing, branding, marketing and distributing furniture products in North America, Asia, and around the world.”

William Yu, an economist with UCLA’s Anderson Forecast who studies the Chinese and L.A. markets, said Nova’s exit wasn’t surprising given the reasons cited. He added that the overriding issue could be the Chinese government’s decision to move away from giving benefits to foreign companies who partner with domestic entities.

“There’s been a change in the Beijing government’s strategy,” Yu said. “Early on, they wanted to attract international investors and companies and allowed joint ventures. Now, they want to help domestic companies more.”

Nova was formed with the merger of two 20-year-old companies: Nova Furniture, a Dongguan, China, manufacturer with a network of 100 franchised retailers, and Diamond Sofa, a Commerce distributor and furniture brand that was one of the Chinese company’s first clients.

Nova Furniture went public in the United States through a reverse merger, buying a Nevada shell corporation in 2009. Two years later, it acquired the parent of Diamond Sofa, co-founded by Lam and her husband.

The recent sale of the Chinese assets, along with Nova’s leadership shuffle, come as the company announced on Oct. 11 that it had signed a $15 million contract to provide its American-made mattresses to professional training company Future Biz School, which has branches in Hong Kong and Malaysia.

Lam, who did not respond to requests for comment, said in a statement announcing the contract that Nova plans to shift its business model and expand its e-commerce capacity.

UCLA’s Yu said that Nova won’t be the only company that might have to shift its attitudes toward China. Instead of being just a source of cheap manufactured goods, the country is now looking to be a player in a host of industries.

“China used to want to be the world’s factory,” he said. “Now it wants to be the producer of everything.”