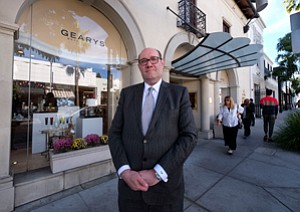 Shoppers, tourists, and commuters who visit or drive through Beverly Hills, beware: Getting around the city is going to be a lot tougher starting in January thanks to an 18-month project to reconstruct Santa Monica Boulevard.

The $20 million project is expected to snarl traffic and complicate parking even more, a prospect that concerns business leaders and shop operators in the city’s famed Golden Triangle.

“No question this is going to be painful for the next year or two,” said Tom Blumenthal, chief executive of Geary’s Beverly Hills, which has a flagship store on Beverly Drive and two boutiques on Rodeo Drive.

The project, which has been on the books for years, will completely reconstruct the deteriorating roadway of North Santa Monica Boulevard, which now carries nearly 60,000 vehicles a day along a 1.5-mile stretch through the heart of Beverly Hills. When the city took over the roadway from the state 12 years ago, the road was already in bad condition, with cracked pavement, crumbling curbs, and poor drainage; the situation has only gotten worse since.

The plan calls for general contractor Griffith Co. of Santa Fe Springs to rebuild the roadway with rubberized asphalt, widen the south side of the street, build curbs and gutters, and replace sidewalks and driveways, among other tasks. At least one lane of traffic in each direction will be kept open at all times during the construction.

From the outset, business leaders have been concerned that disrupting such a major thoroughfare would cause havoc, increasing the city’s already major traffic congestion and making parking more difficult.

“We’re quite concerned that people will experience nightmarish traffic conditions and decide not to return until the project is finished,” said Mark Tronstein, president of the Rodeo Drive Committee of Rodeo Drive merchants; his family owns several parcels along the famed road. “That’s why the more mitigation we can do and the more we can promote and publicize to make it easier to access the Golden Triangle stores, the better.”

These concerns have been heightened because of extensive construction at the west end of the project zone, at the intersection with Wilshire Boulevard.

One project, the $200 million Waldorf Astoria addition to the Beverly Hilton Hotel, is expected to wrap up in the next six months; while another megaproject, a $1 billion condominium complex on the site of the old Robinson’s May department store by Chinese developer Wanda Group, is slated to start late next year or early 2018.

On the other end of town, Wilshire faces extensive construction for Los Angeles County Metropolitan Transportation Authority’s Purple Line station at La Cienega Boulevard, though the biggest impact there is not expected to be felt for at least a couple more years.

“We’re really hoping everything proceeds on schedule with the Santa Monica Boulevard project, because any delays could result in a perfect storm of construction with these other two projects,” said Todd Johnson, chief executive of the Beverly Hills Chamber of Commerce.

City officials have taken steps to ease the impact of the Santa Monica reconstruction project on businesses in the Golden Triangle retail district.

First, the city delayed the start of construction for three months – from October to January. That way, Johnson explained, only one holiday shopping season will be impacted. Second, the city has split the project into two phases: The western half extends from Wilshire to Rexford Drive, and the eastern half runs to Doheny Drive.

With these two moves, city officials hope that construction along the western portion of the road closest to the Golden Triangle retail district will not impact holiday shopping at all, said city spokeswoman Therese Kosterman.

But that’s not all. To keep traffic flowing as smoothly as possible, the city has proposed temporarily removing metered parking spaces along South Santa Monica (the commercial access road), yielding an extra lane for traffic in each direction. Instead, those seeking parking in that area would be directed to parking garages between North and South Santa Monica, where attendants will tandem park cars to double capacity.

The Beverly Hills City Council is expected to take up these proposals this week, Kosterman said.

The city also plans to keep some left-turn lanes from North Santa Monica open and provide extra signage to let motorists know the shops in the Golden Triangle will be open throughout the construction period.

Will all this be enough?

Business leaders and owners hope so.

“The businesses I talk to are still somewhat nervous because of the uncertainty of the actual impact, but they’re pleased with the proactive and direct approach the city is taking,” said Jon Gluck, president of Beverly Hills 9OH2O on Beverly Drive south of Wilshire.

But Blumenthal said his biggest concern is the potential loss of tourist traffic, which accounts for roughly one-fourth of sales at Geary’s three stores.

That’s because a tour bus stop on Santa Monica near Canon Drive will be removed during construction; tour buses will be redirected to a loading zone on Third Street east of City Hall, nearly a mile away from stores on Rodeo.

“Locals can adapt over time and still find our stores; but tourists only get one shot,” Blumenthal said. “If it’s too hard, they will give up and we lose that business.”

But there is one factor that could reduce the potential loss of customers: The two shopping centers closest to Beverly Hills – Westfield Century City and the Beverly Center – are both undergoing major renovations that will extend well into next year, if not beyond, making them unlikely to steal shoppers from Beverly Hills.

That offers some comfort that customers will return once the project is completed.

“It may be a hassle for 18 months but we’ll survive,” Blumenthal said.