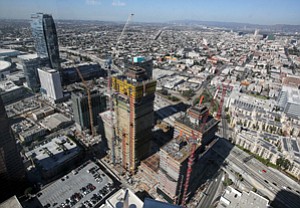 Chinese investors seeking to park their money in L.A. real estate have typically purchased single-family homes. But with the Chinese government doubling down on restricting the money that’s allowed to flow out of the country, investors are beginning to turn to less-pricey condominiums.

That could be good news for Metropolis, a $1 billion project from Shanghai-based developer Greenland Holding Group rising on a 6.3-acre lot downtown. It is set to welcome its first residents by the end of the year and deliver 822 condos by 2018, making it one of the largest L.A. condo developments in recent years.

Greenland already counts on widespread customer loyalty in China as one of the nation’s biggest developers and is vigorously marketing the project with sales teams in Shanghai, Guangzhou, and Beijing.

Eddie Chang, an executive vice president at Cathay Bank, said he began noticing a couple of years ago that Chinese homebuyers were beginning to consider condos rather than traditional houses.

“The high demand for luxury, big houses has been slowing down,” he said. “Because the government is controlling the outflow of cash, it makes the affordability of condos look more desirable.”

Sofia Padilla, marketing and sales director for Greenland’s L.A. office, confirmed that Chinese nationals are among the buyers for the roughly 200 Metropolis condos in escrow, with prices ranging from $600,000 to $2.3 million.

“It’s going to be home to everyone from all over,” Padilla said. “We’re not especially targeting any specific demographic.”

Even at Metropolis’ sky-high rates of roughly $1,100 a square foot, the condos are a steal compared with homes in Shanghai or Beijing, said Clayton Dube, director of USC’s U.S.-China Institute.

“Real estate in China’s biggest cities is just impossibly expensive,” Dube said. “L.A., which most Americans would argue is unbelievably expensive, is a bargain by comparison.”

And prospective buyers in China armed with fat pocketbooks might be particularly poised to regard Los Angeles, home of international icons such as the Lakers and top schools such as USC, as a prime destination.

“China’s well-to-do increasingly think of themselves as members of the global community,” said Dube. “They find real estate in the U.S. quite attractive.” Chinese buyers pumped $27 billion into U.S. residential purchases between April 2015 and March of this year, according to the National Association of Realtors, making China the biggest foreign spender, followed by Canada and India. Chinese buyers paid about $937,000 a property on average, and often in cash. California claimed one-third of those purchases.

The acquisitions come as the Chinese government is scrambling to keep its capital at home amid an economic slowdown, volatile stock market, and weakening yuan. As part of that effort, individual Chinese investors can only send $50,000 abroad a year. And the various workarounds, both legal and illegal, are becoming tougher to carry out.

Downtown has a tight condo market compared with its abundant apartment supply, partially a result of the financial crisis that hit just as multifamily construction was underway in the early 2000s. There are 30,390 apartments in the market, compared with only 5,636 condos, according to second-quarter data from the Downtown Business Improvement District.

However, the condo inventory is expected to get a boost over the next couple of years, with an additional 2,000 units under construction, including Metropolis, according to the BID.

The most recent high-profile condo project to be completed was the Ritz Carlton Residences at L.A. Live, tucked into a tower with the J.W. Marriott hotel. The 224 condos sold out in 2014, three years after opening, with the final unit – a $4 million penthouse – going to a Chinese buyer, according to Hana Cha, who sold the condos for developer Anschutz Entertainment Group.

Overall, about 35 percent of the project’s buyers came from Asia, including a handful from mainland China. They represented a mix of pied-a-terre owners and investors as well as families whose students attended USC.

Cha, now a managing director at residential brokerage Compass, said Metropolis is expected to attract a large number of foreign buyers from mainland China, with many purchasing for long-term investment purposes and paying in cash.

That makes sense given Greenland’s reputation back home, said Laurie Lustig-Bower, an executive vice president at CBRE who sold the Metropolis site, formerly a parking lot, to Greenland in 2014 for nearly $150 million.

“They’re well-branded in China and a lot of their customers trust them,” she said. “That helps people who are halfway around the world purchase a condo in Los Angeles.”

Metropolis also has an advantage because it is the biggest condo project set to open downtown in the coming months. The only competitor on a similar time line is Ten50 West, set to deliver 150 units in the spring. About half have sold, said Arden Hearing, managing director for project developer Trumark Urban. The majority of Ten50 West buyers already live downtown.

Metropolis will soon have to compete with another rival, however, in Beijing-based Oceanwide Holdings Co., whose Figueroa Central development is slated to deliver about 500 condos, a hotel, and expansive retail space in 2018.

Another competitor is Circa from Koreatown-based developer Jamison Services and Mid-Wilshire-based Hankey Investment Co. The project, which is planning nearly 650 condos, is set to open by 2018.

Metropolis is banking on its sweeping views, contemporary design, luxury amenities, and diversity of units ranging from studios to two-story penthouses to keep it competitive.

“The property,” Greenland’s Padilla said, “offers buyers the ability to join the resurgence of downtown without compromising the luxuries of modern living.”