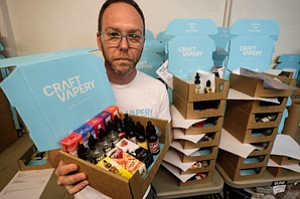 Joshua Krane is looking “anywhere but California” as he scrambles to find a new location for his e-cigarette vaping liquid warehouse near downtown.

That’s because by July 1, the liquids that Krane’s Craft Vapery business makes and stores in the warehouse just west of the Los Angeles Convention Center will be slapped with a tax of at least 65 percent, thanks to statewide voter passage of Proposition 56 in November.

“This is going to be absolutely devastating for us,” said Krane, who employs about five people at the warehouse. “If we want to stay in business, we can’t have that warehouse in California, and we may no longer even be able to sell to California customers.”

Krane’s response is on the extreme end of a growing alarm spreading through the local vaping industry as the new tax looms. Los Angeles is home to hundreds of retailers and vaping liquid manufacturers; nationally, the market was estimated at more than $3.5 billion last year.

Other business owners said they will pass on some of the tax to their customers, but absorb some of it themselves, forcing a major hit to profit margins. All said they hope the levy falls short of its proponents’ stated intention of discouraging people from taking up e-cigarettes.

While the headline in Proposition 56 was a $2 tax on a pack of cigarettes, a small phrase in that measure is poised to wreak havoc on the region’s vaping industry: “implementation of an equivalent tax on electronic cigarettes.”

Proponents of the measure argued that including e-cigarette products in the new tax was necessary, calling the products a gateway for teens into smoking.

The 10-year-old vaping industry now only pays the existing sales tax rate on its battery-powered e-cig delivery devices and nicotine-laced vaping liquids that customers pour inside of those devices. The liquid is turned into vapor that is inhaled to deliver nicotine into the body. In most Los Angeles County cities, the tax rate for such products is about 9 percent, though that, too, will go up next year with a raft of sales-tax hikes.

The lack of a special tax on e-cigarettes helped propel the industry’s growth and turned Southern California into a major industry center.

Proposition 56, which was approved by 64 percent of voters, first extends the existing excise tax on other tobacco products (currently 27 percent of wholesale price) to battery-powered e-cig delivery devices and vaping liquids. That tax will kick in April 1.

Then the state Board of Equalization in the spring will determine the exact equivalency rate for e-cig products of the $2-per-pack increase in the cigarette tax. Board spokesman Mark DeSio said this will push the tax rate to between 65 percent and 68 percent of the wholesale price for e-cig delivery devices and vaping liquids. This rate will take effect on July 1.

All this comes on top of another severe blow. Under a separate law enacted earlier this year by the state Legislature, as of Jan. 1, sale of all tobacco and e-cig products will be banned to anyone under 21 years of age. That cuts out the lucrative 18-20 market for e-cigs.

Tom Scott, executive director of the California chapter of the National Federation of Independent Business, said he’s heard anecdotally from some of his small-business members who are e-cig retailers that the ban on selling to anyone under 21 is already having a major impact, forcing down sales projections by as much as 20 percent.

“Now, we have this giant new tax,” Scott said. “It’s the piling-on effect of all these taxes and regulations that is so concerning.”

Nonetheless, Scott said that most of the retailers plan to tough it out – for now.

Unlike Krane, that’s the attitude taken by two other local e-cig businesses.

At Beyond Vape, a distributor and retailer in Baldwin Park that placed No. 5 on the Business Journal’s 2016 Fastest Growing Private Companies list, Chief Executive Michael Chen said that because his business has higher profit margins than many in the industry, the company will be able to absorb more of the tax hit than other players.

“For the most part, we buy direct from the vape liquid manufacturers and resell to the retail stores, which gives us higher margins than most e-cig retailers,” Chen said. “So we can absorb half of the tax increase ourselves and pass on the other half to our retail store customers.”

But Chen said he expects the margins for the company’s two retail stores in Downey and Capitola to be squeezed.

“We’re still determining the scope of those hits and what it will mean for those stores,” he said.

At vape liquid manufacturer Drip Club in Lincoln Heights, on the other hand, Chief Executive Michael Zhang said he built into his business model the expectation that e-cig products would be taxed.

While he called the levy in Proposition 56 excessive, he said he, too, will absorb some of the cost and pass on the rest to his online and brick-and-mortar e-cig retailer customers.

He said that if end consumer demand drops too much, he will have to offer discounts, which would be even more of a hit to margins.

Despite this, Zhang said, “we’re cautiously optimistic that we will be able to remain in California.”