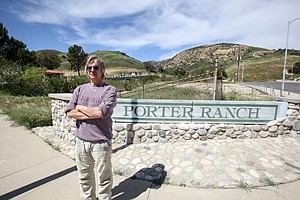 The firm has already been fined $75,000 by state regulators for the violation, which occurred at a field it operates in the Aliso Canyon natural gas storage facility.

Termo applied to the Los Angeles County Department of Regional Planning to add 12 oil wells at the facility in 2014, and the violations could jeopardize that process.

“This is going to have a devastating effect on their proposed project,” said Los Angeles City Councilman Mitchell Englander, who submitted a motion last week calling for a criminal investigation of Termo. “If this is as bad as it looks, I would like to see them prosecuted to the full extent of the law.”

The Termo leak is distinct from Southern California Gas Co.’s larger gas leak at Aliso Canyon that saw more than 4,500 Porter Ranch-area residents forced out of their homes.

Residents say Termo, which put its expansion plan on hold in the wake of the SoCal Gas leak, should not be given any chance to drill new oil and gas wells near their neighborhood.

“When the company comes back, we’re going to fight against the project,” said Matt Pakucko, president of activist group Save Porter Ranch. “We’re going to squash it.”

Englander said the drilling project is not compatible with a populated community such as Porter Ranch.

“We’ve seen devastating effects from SoCal Gas and the length they’re willing to go to turn a profit and expose the community. Now it’s Termo,” he said. “The county could deny the extension project, and it should deny it.”

He was speaking after calling for a criminal investigation over a January venting incident in which he said the company showed a total lack of regard for health and safety rules.

State inspectors spotted evidence of a possible gas leak with an infrared camera and on closer examination found hidden behind a tree the top of a 300-foot-long underground pipe sticking out of the ground and venting gas into the atmosphere.

Those inspectors said in a subsequent report they believed Termo intentionally released natural gas into the air because it couldn’t transmit it to SoCal Gas, which had halted operations due to its own leak.

Normally, Termo collects natural gas as a byproduct of oil production, compresses it and sells it to SoCal Gas, which injects it into an underground storage facility.

The inspectors could not detect the length of time over which the leak occurred, but said the size of oil spots nearby indicated that the gas had been vented for weeks or months.

The state’s Division of Oil, Gas and Geothermal Resources, which regulates oil drilling as part of the Department of Conservation, issued the $75,000 fine on March 18.

“Natural gas is a valuable commodity and you don’t give it away,” said Anneliese Anderle, a former field engineer for the oil and gas division.

Ralph Combs, manager of corporate development at Termo, said in a statement that his team is “reviewing the order, and has identified several discrepancies by the state which we are evaluating.” He added, “We look forward to resolving this issue in a timely manner.”

Anderle said that while Termo might have felt it had no choice but to vent its gas after SoCal Gas was ordered to shut its Aliso Canyon storage facility, other options were available.

“They should’ve gone to (South Coast Air Quality Management District) and got an emergency permit to flare the gas,” Anderle said. “Maybe they just didn’t try hard enough to find other means to get rid of it.”

Termo was fined $75,000 for waste of gas, improper disposal of oil field waste, and failure to monitor production facility.

Meanwhile, Teresa Schilling, spokeswoman for the Division of Oil, Gas and Geothermic Resources, said the agency might halt Termo’s Aliso Canyon production if it fails to pay the fine.

“If Termo refuses to pay the civil penalty after the order becomes final, the department can seek an order from the Superior Court directing the discontinuation of production until it has been paid,” she said.

Termo was formed in 1921 after its founder, E.E. Combs, mortgaged his house and drilled his first oil well on Signal Hill near Long Beach. Today, it employs 43 people and operates 50 oil wells in Los Angeles County and 153 wells nationwide as well as in Ventura and Kern counties.

It has been operating in Aliso Canyon since 1989, when it bought the 3,200-acre site and installed 18 wells, eventually producing as much as 500 barrels of oil a day.

Under its expansion proposal, now on hold, Termo has sought to add 12 wells to the site over six years. When the company tries again, it will face close scrutiny from Los Angeles County authorities.