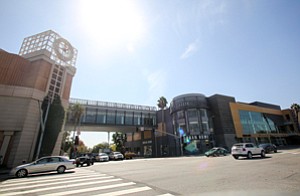 Lagging behind the times and preparing to lose its anchor tenant, the Westside Pavilion is ready for a fresh start.

“A lot of those old-fashioned ’70s and ’80s malls need to really change to meet the needs and the desires and lifestyles of today,” said Clare De Briere, president of downtown L.A. developer Ratkovich Co. “If they take dramatic action, they’ll be fine.”

Spokeswoman Karen Maurer of Macerich Co., the Santa Monica owner of the Westside Pavilion, said its renovation plans are still in development and did not know when they would be released.

“We are in the planning process and not ready to share the overall vision yet,” she said.

However, the company has been sharing its ideas with local community leaders over the past few months.

The biggest change on the books is to tear away bunkerlike walls that separate the front of the mall from Pico Boulevard and expose the ground-level shops to the street, according to Barbara Broide, president of the Westwood South of Santa Monica Boulevard Homeowners Association.

“The community is very excited to know the mall wants to revitalize and open up the street,” said Broide. “The mall never really related to Pico.”

De Briere believes these new strategies are poised for success.

“Having that street engagement on Pico is fantastic because it’s already a natural retail environment,” she said, citing the famous Apple Pan across the street.

She also said that the families and UCLA students living on surrounding streets would be a natural target audience, and that it would be smart to tap groceries and restaurants as anchor tenants rather than a big-box clothier such as current anchor tenant Nordstrom Inc., which now occupies three stories of the retail complex but is moving next year to a Century City mall owned by Westfield Corp.

“In that location, they can figure out how to make that space work,” said De Briere. “I don’t think the loss of Nordstrom is going to make that much of a difference to the success or failure.”

But Steve Sann, chair of the Westwood Community Council, said the loss of Nordstrom could prompt other Westside Pavilion retailers to flee, possibly relocating to Westwood a couple of miles away.

“With that special retailer leaving the Westside Pavilion, the theory is you’re going to see an exodus of the better retail stores leaving the mall,” he said. “The question is, what does Macerich do to replace them?”

Even with Nordstrom still operating, the mall’s business has dragged over the past several years, Sann said.

“You can roll a bowling ball down those walkways and not hit customers most of the times of the day,” he said.

The Westside Pavilion’s insular design style was popular among other L.A. malls built several decades ago, such as Santa Monica Place and the Beverly Center. At the Westside Pavilion, designed by the late Jon Jerde, the only hint of the outdoors is sunlight streaming through the domed skylight roof.

The Grove, built in 2002 in L.A.’s Fairfax District by developer Rick Caruso, took a new tack by placing shops on faux streets, complete with a trolley car, fountain and park. It was a hit, and Caruso followed it up in 2008 with the similar Americana at Brand in Glendale. Gradually, older malls have embraced the open-air aesthetic.

Santa Monica Place, owned by Macerich, stripped away part of its roof and created an outdoor dining court overlooking the ocean as part of a $265 million renovation in 2010.

Macy’s Plaza in downtown Los Angeles will reopen this summer as the Bloc after a $180 million renovation that has torn away the mall’s roof to create a three-level retail plaza open to the sky.

In addition, Westfield is working on an $800 million expansion of its Century City mall that will lure away Nordstrom from the Westside Pavilion. By next year, the upscale retailer will take over a three-story space there with 149,000 square feet.

“We believe we can offer customers a better shopping experience in a new store that will include our latest design concepts,” said Jamie Nordstrom, president of stores for Nordstrom, in a statement last year.

Broide said plans for the Westside Pavilion could include a revamped exterior with “lots of glass.” The ground-level parking lot behind the mall might be expanded to two levels, so shoppers can access the second level of shopping directly from their cars.

The third floor could be converted into creative office space, which Broide thinks would be an appealing location given the local restaurants and the upcoming light-rail station a few blocks away at Sepulveda and Exposition boulevards. She also said that Macerich had discussed Whole Foods Market Inc. replacing Nordstrom.

On the opposite side of the mall, Macy’s Inc. has shown no interest in renovating its massive store and attached parking lot.

On a recent weekday evening, a handful of customers strolled along the polished tile hallways of Westside Pavilion while music from the likes of Carole King and Adele played through the speakers. At the food court, about 15 tables were occupied, mostly by families who sent toddlers to play in a carpeted zone for kids.

A food retailer, who did not wish to be named because he was not authorized by Macerich to speak to the press, said his customers are mostly locals and thinks service-based businesses such as children’s activities or beauty salons could help drive foot traffic.

Several Santa Monica College students, including Zen Teo from Singapore, said they came to the mall to eat and shop simply because it is the closest retail center.

“I like this mall, even though it’s quiet,” said Teo.