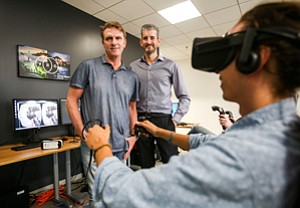 Virtual reality as an entertainment vehicle, long ignored as a fantasy and gimmick, has begun to come into sharp focus as local entrepreneurs, media executives, and investors throw themselves at the immersive medium.

The action has ratcheted up two years after Facebook Inc.’s headline-grabbing $2 billion purchase of Irvine headset maker Oculus VR. Now, leveraging L.A.’s place at the center of the entertainment content universe, firms have begun to embrace the new platform.

“We are in the very infancy of all this,” said Robert Stromberg, co-founder and chief creative officer of Mid-Wilshire’s Virtual Reality Co., which recently created a VR experience for last year’s hit movie “The Martian” and plans to produce its own feature films down the line. The firm, which boasts Steven Spielberg as an advisory board member, launched in 2014 and received a $23 million round of funding earlier this month from investors such as Hengxin Mobile Business Co. of Beijing and San Francisco’s Rothenberg Ventures. It was co-founded by Chris Edwards, who serves as chief production officer.

“What we all know is that this will financially pay off in the future,” said Stromberg, who won Academy Awards for his art direction of 3-D blockbusters “Avatar” and “Alice in Wonderland.”

That belief in future profitability is on full display as global investment in virtual reality has skyrocketed, according to New York research firm CB Insights, growing from $95 million in 2014 to $465 million last year – an increase of 391 percent.

This gold rush has led the world’s biggest media players, including Walt Disney Co. and Twentieth Century Fox Film Corp., to rub elbows with small upstarts as business opportunities and partnerships are explored.

Some companies, such as Spaces Inc. of Santa Monica, are targeting consumers in large venues rather than those viewing content on their couch. Spaces launched in May after receiving $3 million in funding from Comcast Ventures and Canyon Creek Capital, among others. It also formed a joint venture earlier this month with Chinese theme park operator Songcheng Performance Development Co. to develop virtual reality attractions within amusement parks across that country.

“When consumers go to theme parks they are going to be entertained and are likely to shell out money,” said Shiraz Akmal, chief executive of Spaces, who co-founded the company with Brad Herman. The pair previously worked on virtual reality projects for DreamWorks Animation SKG Inc. “Ultimately, it’s positioning VR attractions where people are willing to pay for it,” Akmal added.

Imax Corp., headquartered in Toronto, is also going for the attraction approach to selling virtual reality content. The giant-screen exhibition firm partnered in May with Swedish virtual reality production and headset company Starbreeze to launch six virtual reality arcades in multiplexes and malls.

Despite the optimism, the risks are great, said Todd Richmond, director of advanced prototype development at USC’s Institute for Creative Technologies.

“Somebody will get lucky and make money on virtual reality in the next six to 12 months,” he said. “Odds are that company will not be in business in three to six years.”

While virtual reality was once plagued by poorly conceived visuals and headsets costing tens of thousands of dollars, the successful launch of Oculus’ software and headset proved that virtual reality could be pulled off with high quality while establishing a historically low price point.

But that doesn’t mean it’s cheap.

The Oculus Rift headset, which started shipping to consumers in March, costs $600 and requires a companion PC system that retails for at least $1,000. Sony Corp., HTC and Samsung have also all launched their own virtual reality headsets.

For the moment, these products remain best suited for a small portion of hardcore gamers willing to shell out big bucks for top-shelf experiences and whose gaming consoles have the computing power to render virtual reality cleanly, said Jon Goldman, a venture partner at Greycroft Partners’ downtown virtual reality seed fund.

Goldman said he sees online gaming marketplaces, such as Valve Corp.’s Steam, as a natural place for consumers to pay for virtual reality content.

“They are places where people are already spending money,” he said.

“The model for monetizing this stuff will be no different from how we download music or watch films on Netflix or Hulu,” he said.

Ryot Corp. of Venice, a recently acquired division of the Huffington Post that makes virtual reality documentaries on subjects such as the war in Syria and dolphin captivity, sees the industry similarly, though it’s revenue doesn’t come from subscription models. Instead, the company gives away most of its videos for free on YouTube and Facebook’s 360-degree sites and makes money though sponsorships and branded videos.

Yet those platforms only feature content shot in quasivirtual reality by a camera system that simultaneously records all 360 degrees of a scene. Videos can be watched on a computer or with a smartphone strapped into a headset such as the Google Cardboard or Samsung Gear VR.

“There isn’t the quite the level of scale of headset distribution that it can compete with YouTube 360 and Facebook 360,” said Molly Swenson, Ryot’s chief marketing officer.