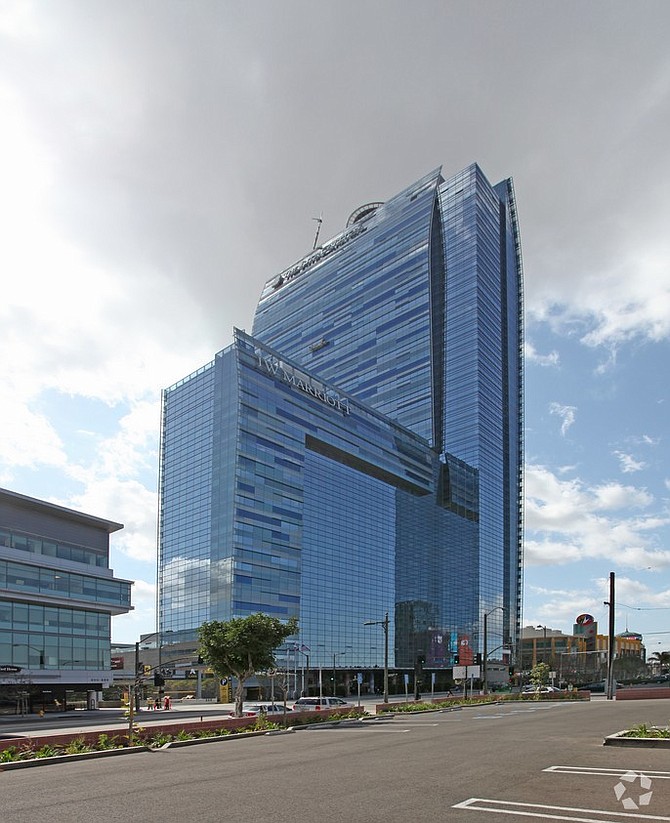 AEG constructed its JW Marriott/Ritz-Carlton tower at L.A. Live in 2010.

Anschutz Entertainment Group is abandoning plans to build a 755-room hotel next to its Ritz-Carlton and J.W. Marriott tower at downtown’s L.A. Live. The move comes as AEG claims that a planned 1,000-room hotel to be developed by the city across the street infringes on its property rights.

In a June 14 letter to City Attorney Mike Feuer, AEG Vice Chairman Ted Fikre said that by moving forward with its own hotel project, the city is disregarding a 1997 agreement that called for AEG to build the Staples Center, LA Live, and a flagship Convention Center hotel.

AEG spokesman Yusef Robb, a former press officer for Mayor Eric Garcetti, said the company is concerned that a city-built hotel, under consideration for a site next to the Convention Center, could block AEG’s access to walkways, driveways, parking, and other facilities.

“Certain proposals under consideration would violate AEG’s agreements with the City,” Robb said in a statement. “As a result, AEG has decided to not proceed with the planned hotel expansion and is turning its attention to securing its existing rights.”

Garcetti press secretary Connie Llanos said that the city is serious about putting up lodgings around the Convention Center.

“Los Angeles desperately needs a modern convention center, and more hotel rooms. Mayor Garcetti is focused on working with all key stakeholders including AEG to make sure both of these things happen for downtown,” she said in an email.

“It’s a loss and I'm disappointed,” said Councilmember Jose Huizar, whose district houses the site. “The Convention Center needs hotel rooms to be competitive with other cities and my office will continue to actively work to bring more hotels to the area.”

AEG’s withdrawal is a blow to the city’s desire to have as many as 8,000 hotel rooms near the Convention Center. It may be a sign that relations between the city and AEG have frayed since the days AEG led the charge to bring a National Football League stadium to a site next to the Staples Center. The plan would have allocated revenue to fund a new wing for the Convention Center.

Those plans fell by the wayside when stadium plans for Carson and Inglewood emerged as frontrunners. The Inglewood site has prevailed.

L.A. city officials went ahead with new Convention Center plans, selecting architects last summer to increase meeting and exhibition space and add a hotel at a cost of $470 million. Then, early this year, the city began considering a new proposal that would build bigger facilities in partnership with private developers.

“The way that you read it is that there’s bad blood,” he said. Still, he noted that AEG may be wise to avoid oncoming competition.

“If I was AEG, and I have the threat of a 1,000-room hotel being built at the Convention Center, then it’s a very smart, prudent economic decision to either cancel or postpone what they’re going to do,” he said.