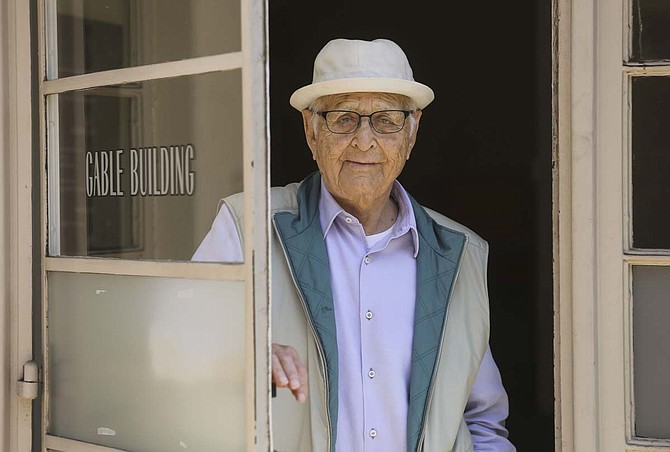 Legendary Los Angeles television creator, writer, and producer Norman Lear doesn’t let the past – or the future – weigh him down. Best known for socially conscious and critically acclaimed television shows “All in the Family,” “Maude,” and “The Jeffersons,” the 94-year-old industry titan has a slew of new projects, including a reimagined Latina version of his 1970s hit sitcom, “One Day at a Time,” co-produced by his Act III Productions Inc. with Sony Pictures Television for Netflix Inc., and a new documentary series called “America Divided” premiering on the cable network Epix in the fall. Being so hands-on keeps him hopping from his Beverly Hills office to the set at Sony in Culver City several days a week. He’s also the subject of a documentary about his storied career, “Norman Lear: Just Another Version of You,” which was screened at the Democratic National Convention last week.

You recast “One Day at a Time” as a Latino story because you felt the community was underrepresented on TV. How’s the new version going?

This version centers on three generations of a Cuban-American family. We have a wonderful cast. It’s going very well. We just taped episode nine of 13 at the Sony Pictures lot. The series premieres on Netflix in January.

How do you think “All in the Family” would be received today?

The men and women in the trenches (of television studio development) tell me the show wouldn’t be made, but I think it would be widely accepted by audiences.

Certainly after what we saw at the Republican National Convention, it seems like we’re in an “anything goes” environment.

You’ve been vocal about Donald Trump. What are you most concerned about if he were to be elected?

Having a president who’s out of his fucking mind.

The issues in this year’s election cycle are a part of the “America Divided” docuseries. What was the motivation behind it?

It’s the work of a group called Radical Media in New York. It’s a journalistic story with various hosts. Shonda Rhimes is a host, America Ferrera is a host, and (hip-hop artist) Common is a host. And I’m hosting an episode about landlords and rental policies in New York City and the amount of people without homes.

You started this genre of combining political and social issues with comedy on TV. Who is doing this well today?

Is there a secret to creating a show that resonates with audiences?

There are as many formulas as there are successful TV shows – formulas in the acting, the directing, and audiences’ acceptance or rejection.

Do you think traditional TV can survive the digital revolution?

Yes. It will live on in some format or another.

Looking back over your career, what would you have done differently?

I don’t know how to regret a single moment since I find myself, at any minute, feeling happy, fulfilled, and great.

What was your favorite moment from the new documentary about your life?

I loved all of it. Directors Rachel Gray and Heidi Ewing did an amazing job. I had nothing to do with it except to lead the life it’s based on.

What’s most important when you think about your legacy?

I don’t think about legacy. I’m into over and next. If there was a hammock between those two words it would be living in the moment. That’s where I am: in the moment.

What keeps you energized?

Waking up in the morning is energizing. I’m not one of these people to wake up and do nothing. I need to have something on the agenda.

As a kid growing up in Connecticut, did you ever imagine you’d end up a legend?