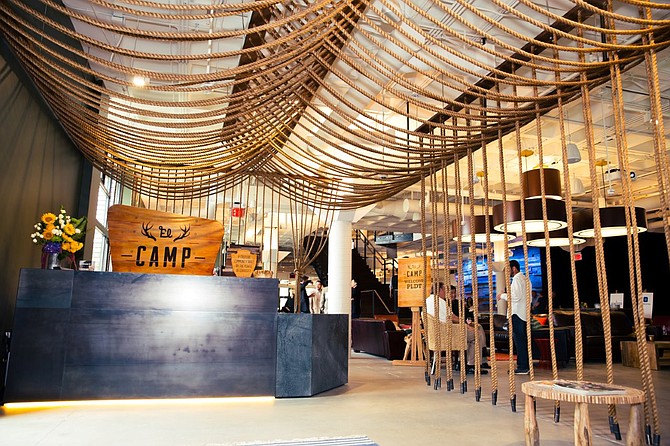 El Camp, an El Segundo co-working space conceived by ad man Eric Johnson, will mark its first anniversary this month at capacity, with about 20 companies and some 200 people filling its 55,000-square-foot site.

The adoption of an industry-specific facility – its space is reserved for advertising and marketing professionals – comes as co-working has evolved from its roots as a flexible option for sole proprietors and bootstrapped startups to focus on collaboration within a single industry.

“We purposely built a space with the idea of working with other agencies,” said Johnson, who came up with the concept as a home base for his agency, Ignited.

Steve King, who studies workplace trends for Emergent Research in Lafayette, said co-working is beginning to see a strong movement toward “verticalization,” or niche focuses, based on growing demand from companies seeking cool offices that will help retain talent.

“Companies are unbundling. They’re becoming more like ecosystems and less like controlled operations,” he said. “Having spaces specifically targeted at the ad agency industry makes a lot of sense.”

Typically, co-working spaces that aim at a specific sector focus on creative industries, health care and bioscience firms, or software and internet startups. But other niches are popping up.

Maker City L.A. in downtown aims at artists and designers, providing facilities for jewelry and textile production, plus a soundstage and green screen. Cross Campus’ new site in El Segundo is a partnership with Starburst Accelerator focused on the aerospace industry. Cross Campus also operates what was once known as the Writers Junction co-working space in Santa Monica, loosely dedicated to the writing profession. NeueHouse in West Hollywood targets filmmakers and musicians with recording studios, screening rooms, and performance space. And even high-end social club Soho House is planning a co-working office near its West Hollywood outpost.

When Johnson and Ignited Chief Operating Officer Bill Rosenthal came up with the idea more than a year ago, it was the $16 billion valuation of industry leader WeWork that served as their inspiration. Pressured by clients to work on ever-slimmer budgets amid flux in the digital advertising world, Johnson said he wondered if Ignited could generate extra income while creating opportunities for networking and collaboration.

Their broker Robert Cavaiola, corporate managing director at Savills Studley, suggested taking a look at the Apollo at Rosecrans complex, a former aerospace manufacturing plant, down the street from Ignited’s office. They snapped up a lease for 11 years valued at $20 million. Johnson and Rosenthal hit on summer camp as a theme, aiming to distinguish the space from the modernist designs of agencies such as TBWAChiatDay while tapping into the idea of childlike creativity.

His 40 employees occupy the first floor, while firms including AdGram, Pipeline Marketing, and Socialtyze are scattered in the surrounding space, which includes a lounge and grassy patio. The proximity gives them the ability to recruit and outsource within the same office – perhaps one company needs graphic designers; another needs a camera person.

El Camp accepts companies only if they are committed to participating in the community. Monthly rates vary depending on space and time requirements, but generally cost $1,000 a person, including parking. That’s roughly on par with WeWork’s Hollywood site, which charges between $900 to $1,250 a month for a two-person office.

But Jerome Chang, founder of Mid-Wilshire co-working company Blankspaces, said focusing on a specific industry could be a pitfall. His own business model takes all comers.

“We don’t care which sector you’re in. … Diversity rules,” he said. “Does it bring about too wide of a net? I believe diversity is better than a niche.”