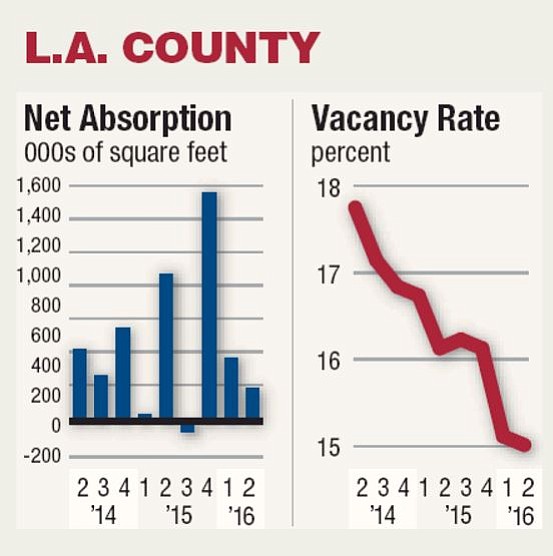 The second-quarter vacancy rate was 15 percent, down from 15.1 percent in the first quarter and 16.1 percent a year ago, according to data from Jones Lang LaSalle. Combined with an influx of new office construction and redevelopments, the low vacancy rate helped contribute to a substantial increase in asking rents, which averaged $3.42 a square foot in Class A buildings, up from $3.29 in the first quarter and $3.13 a year ago.

“On the macro level, the second quarter continued to see a lot of velocity in the office market, specifically with the technology and entertainment sectors really driving the activity right now,” said Michael Arnold, executive vice president at Newmark Grubb Knight Frank in West Los Angeles.

Strength was seen in the South Bay, where the vacancy rate fell to 18.4 percent from 19.6 percent last quarter and 21.7 percent a year ago. Asking rents throughout the submarket rose to $2.53 a square foot from $2.44 in the previous period.

“As long as employment stays on track and the market stays out of a recession, you’ll see El Segundo fill up and the trickling effect lead south – just like what happened on the Westside,” McKeever said.

The Westside still reigns as the county’s most in-demand office market, with per-square asking rents hitting $4.76 in the second quarter compared with $4.62 last quarter and $4.20 a year ago.

The media and entertainment industry accounted for 54 percent of all Westside leasing activity this quarter, McKeever said.

“It’s an industry that generally drives the growth for most of Los Angeles – especially in the Westside, the South Bay, and Hollywood,” he said.

Hollywood, however, saw the biggest spike in vacancies, rising nearly eight points to 28.7 percent even as net absorption topped 70,000 square feet. Henry Gjestrum, a senior analyst at JLL, said Hollywood’s high vacancy rate is a reflection of the neighborhood’s increasingly active office market – with leases signed but space not yet occupied.

“There’s definitely more to come in Hollywood,” Gjestrum said. The ongoing conversation surrounding Hollywood’s promising future in the office market might be why asking rents continued to increase quarter to quarter, averaging $4.31 a square foot in the second quarter compared with $4.26 in the first.

Low vacancies in the Tri-Cities of Burbank, Glendale, and Pasadena paint a more direct image of the expanding office environment in Los Angeles. The submarket’s vacancy rate was 12.3 percent, down three points from a year ago.

Hasbro Studios announced in April that it signed a deal to nearly double its office space in Burbank. The company, which previously occupied 45,000 square feet in the city, picked up an additional 80,000 square feet at Media Studios North, a space that was vacated by Yahoo Inc. when the technology company decided to make Playa Vista its Southern California base.

Record-low vacancy rates continued during the second quarter on the industrial front. The region’s industrial vacancy rate fell to 0.9 percent from 1.1 percent in the first quarter, according to JLL.

Industrial vacancy rates dropped significantly in the San Gabriel Valley and Mid-Cities. For both regions, vacancy rates fell to 0.6 percent from 0.8 percent – a 25 percent drop quarter to quarter.

Average asking rents were 72 cents a square foot across the county, up from last quarter’s 70 cents and well above last year’s 65-cent second-quarter figure.