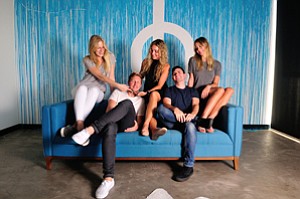 When three interior design students at George Washington University started a business advising friends on how to furnish their apartments, they realized people their age wanted help even though they couldn’t afford an interior designer.

Now, a group of high-profile L.A. tech entrepreneurs, including Tinder’s Sean Rad and Ben Silverman of Electus, have backed the trio’s West Hollywood startup Homee, which launched earlier this month and closed a $5 million Series A round from Peter Thiel’s Founders Fund.

The company’s plan, said co-founder and Chief Executive Beatrice Fischel-Bock, is to upend the $213 billion furniture market through an app that provides users with design concepts based on photos of their rooms and allows them to order furniture through their phones. Designs are made by Homee employees.

Much of the company’s momentum resulted from the involvement of Rad, Tinder’s chief executive, who saw Fischel-Bock, Madeline Fraser, and Lizzie Grover pitch their company on the ABC show “Shark Tank” in May of last year.

Rad reached out to Fischel-Bock on Facebook and later bought an undisclosed stake in the company, introducing her to investment firms Foundation Capital and Founders Fund Angel, along with a group of L.A. entrepreneurs who put up a combined $2.2 million in seed money in the fall. Those investors include Silverman, founder and former chairman of West Hollywood multimedia company Electus, which, like Tinder, counts IAC as a majority owner. Scooter Braun, an L.A. talent manager and record label owner who represents A-list stars such as Justin Bieber and Kanye West, also invested alongside his wife, Yael Braun, who started the organization Fuck Cancer.

“All I did was make the introductions,” said Rad. “I’m an advocate, which helps give other investors further confidence. This is really about me investing in things I’m personally passionate about and care about, irrespective of economics.”

While Homee used the seed money raised last year to prove the concept and obtain offices, the latest infusion will allow the company to scale up by hiring more engineers and designers beyond its existing staff of 25, which includes Ben Broca, chief technology officer, and Ethan Gromet, chief design officer. The company plans to make the service available through Facebook Messenger soon and eventually as an Android app.

Fischel-Bock declined to disclose specific financial figures, but said Homee’s revenue had grown 700 percent during the 10 weeks leading up to the July 6 launch while the app was still in beta. Homee makes money through a markup on furniture costs charged to the customer. Fischel-Bock said about 20 percent of Homee’s users buy furniture through the app, though she declined to say how many users there are.

“The word spread much faster than expected,” she said. “We’ve had a crazy amount of organic growth.”

One of its competitors is Laurel & Wolf, a Hollywood app launched in 2014 that’s similar to Homee but charges an upfront fee. It has raised a total of $5.5 million in outside capital.

Peter Csathy, founder of tech and media investment and management firm Creatv Media and the former chief executive of Manatt Digital Media Ventures, said Rad’s involvement signaled to other investors that it was a good opportunity that stood out from the crowd.

“Just like Homee is curation of furniture, what Rad has done is curated an opportunity for others to invest in,” said Csathy. “It’s really about opening the Rolodex to make opportunities happen.”

Experts in venture capital and wealth management said that a growing number of founders and chief executives are investing in startups, particularly in Los Angeles, with its burgeoning tech and venture capital scenes. Two of the most prominent local examples are Legalzoom.com Inc. and Honest Co. co-founder Brian Lee and Atom Factory founder Troy Carter.

Wilton Risenhoover, a tech entrepreneur who teaches entrepreneurship at UCLA Extension and sits on the investment committee for the UCLA Venture Capital Fund, said entrepreneurs often back companies for which their knowledge and skill set would be an asset.

For Rad, a lot of his value-add expertise had to do with millennials, who make up the vast majority of dating app Tinder’s roughly 10 million daily active users.

“Millennials like to buy anything in a particular interface,” he said. “Homee is rethinking the process (of furniture shopping) and delivering it in a mobile-driven package they can understand.”

He also wanted to pass along what he wished someone had told him when he was starting Tinder.

“I don’t think there’s a CEO who has accumulated some level of credibility who doesn’t invest either time or money in fostering entrepreneurship in others,” he said. “You tend to look back and think, If only someone could have given me advice. Any sensible person feels a desire to pass it on.”

Rad said he’d made an angel investment in one other startup, Costa Mesa’s Rich Uncles, a real estate investment platform for accredited investors.

Another local founder-turned-investor is Richard Rosenblatt, Demand Media co-founder and chief executive of Santa Monica TV-clip app Whipclip. Rosenblatt, who invested in travel planning app WorldMate in 2007 and Century City location-data firm Factual in 2010, said he was motivated by a similar desire as Rad.

“As an L.A.-based CEO, I want to support other CEOs in the community,” he said. “It’s great to support them with a direct investment. If it’s in an area you understand or you run a company in that area, it gives you a unique view of what may work.”