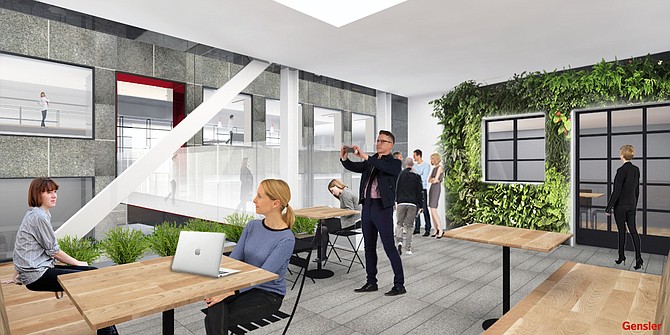 Architecture firm Gensler long ago outgrew its jewel box office in downtown, taking two floors in the neighboring tower at City National Plaza to accommodate nearly 600 employees. Now the firm is breaking down the walls to bring everyone together. Plans call for building a bridge between the jewel box and the tower to its north, where Gensler would remove part of the fourth floor to create a cavernous, flexible space.

“What we’re doing is fairly common within industrial warehouse buildings. The fact that we’re doing it within a traditional office building is significantly more radical and revolutionary,” said Michael White, managing director at Gensler. “Being disconnected just doesn’t work for our business and our culture.”

The firm plans to begin construction in August and to complete the project early next year. The tower space, dubbed the “family room,” will include meeting rooms, window booths, a coffee bar, and kitchen. Plans also call for open space designed for staff gatherings ranging from project presentations to parties.

“You could turn the volume up really loud and not bother anybody,” White said.

Three wellness rooms will offer refrigerators, sinks, couches, and beds, geared for new mothers or employees who need a quiet space to recharge.

The bridge will stretch 30 feet long and 7 feet wide in a minimal design of transparent glass panels. Gensler will remove the walls at the spot where it merges with the jewel box, creating an open-air patio.

The new tower lease is set for 15 years, meant to signal that Gensler will be downtown for a while. White said the funding for the improvements will come from a tenant improvement allowance from building owner CommonWealth Partners, but declined to state the cost.

Gensler is aware its project could serve as a model to landlords and tenants trying to transform corporate skyscrapers into engaging campuses.

“It’s really about the social experience,” White said. “Getting people together and creating spaces that encourage them to connect.”