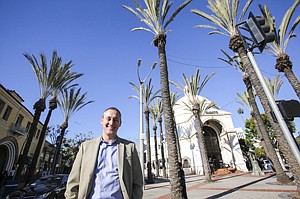 Andrew Thomas of the Westwood Village Improvement Association at the heart of the retail zone. Photo by Ringo Chiu.

Westwood’s years as a ghost town might soon be over. More than a dozen shops and eateries are opening in the long-struggling neighborhood near UCLA, and some say they could pave the way for a lasting revival.

“We’ve had fits and starts before, but this time it’s the real deal,” said Andrew Thomas, executive director of the Westwood Village Improvement Association.

The challenge now will be keeping up the momentum to transform Westwood into a bustling retail zone catering to local families, office workers and students.

“We’re not there yet, but we’re on our way,” said Thomas. “If we stall again, it would send a terrible message.”

In its 1970s heyday, Westwood buzzed with movie theaters, shops and eateries that attracted visitors from all over Los Angeles. Neighborhood shops began closing their doors in the late 1980s as competition from Century City and Santa Monica shopping malls lured customers away. In 1988, the death of a 27-year-old female bystander in a gang shooting was a final blow to business inside Westwood’s 52-acre shopping zone, called “the village,” where shopping was already slumping. Since then, retailers cycled in and out and many of the numerous movie theaters shuttered. Storefronts turned into T-shirt shops and fast-food joints.

Things started looking up around 2008, when the Palazzo Westwood apartments opened with several hundred units across from Kroger Co.’s Ralphs. Trader Joe’s moved into the complex and later Target Brands Inc. opened across the way. A business improvement district invested in street cleaning and hired “ambassadors” to stroll the streets and assist visitors. Developers made plans to construct high-end apartments and hotels.

The latest game-changer was Urban Outfitters Inc.’s decision a couple of summers ago to double its size with a new location on Westwood Boulevard, broadcasting the brand’s commitment to the area.

Other businesses soon flocked to the same street, nudged along by UCLA alum Jim Brooks at Topa Management Co., which owns a quarter of Westwood real estate. The rest of the properties are split up among 55 owners, he said, who haven’t always been choosy about bringing in tenants with long-lasting promise.

“Because we have such a large footprint, we’re more concerned about our businesses surviving and benefiting each other,” said Brooks, who brought in Sur La Table, Paper Source, Francesca’s and KazuNori. Topa’s portfolio of 240,000 square feet is now between 18 percent and 29 percent vacant, compared with 35 percent empty in 2012.

The new business wave likely will not restore Westwood to its 1970s glory days.

But locals don’t necessarily want to see the area turn back into a flashy entertainment destination. Instead, they hope the changes will usher in shops and eateries that can draw locals in full force and stay in business for years to come.

“We went through the shirt shops and fast foods and now we’re getting into retail for the families and people who live and work near the village,” said Sandy Brown, who has lived in the area since the 1970s. “It’s everything we’ve been aiming for.”

Sur La Table was pleased to find a site on Westwood Boulevard where it could showcase cooking classes through large windows facing the street.

“We feel that we are joining the neighborhood at an ideal time,” said Mark Comstock, Sur La Table’s vice president for real estate, citing the blend of existing and new stores.

The shop, open since September, wants to appeal to a variety of ages, offering workshops to sorority members one day and local children another.

Cava Grill of Washington, D.C., targeted Westwood for its second California site to bring the chain’s health-oriented Mediterranean food to the neighborhood’s mix of students, office workers and locals.

“We hope we can be part of a rebirth of a great community,” said Chief Executive Brett Schulman, adding that he plans for Cava to have a presence at the weekly farmers market and student events.

The Westwood site of Tender Greens, owned by TYP Restaurant Group, will be one of the chain’s largest spaces, seating 160 people around an atrium in a historic brick building with a red tile roof. Director of PR Christina Wong said the company liked that the site would be able to attract diners at all times of day, not just lunch, because it is surrounded by both businesses and residences.

Just as retailers are encouraging each other to take the Westwood plunge, low rents are also incentives. Rents there are 40 percent lower than in Santa Monica, for example, according to Gabe Kadosh, vice president for retail services at Colliers International.

“Westwood is an opportunity for retailers to step into the Westside and not pay a premium for it,” he said.

The growing demand has already pushed up rents between 8 percent and 10 percent in the last two years to $5 or $6 a square foot a month.

“Two years ago, that would have been laughed at,” said Kadosh.

Eric Sussman, senior lecturer in accounting and real estate at UCLA’s Anderson School of Management, said time will tell if the new businesses can avoid the same fate. The rise of e-commerce is a hurdle for all shopping districts, and could have been the death knell for Bel Air Camera.

“I imagine there’s nothing at Sur La Table you couldn’t find online and for less money,” he said. “The question is: Can they get enough sales to pay whatever the rents are?”

However, Westwood boosters say they do not worry about the newcomers taking flight, and that brokers are in talks with major retailers.

Also in their favor are the tree-lined streets that are home to classic examples of Mediterranean and Spanish architecture, including one 1930s building being renovated by Topa that will house KazuNori from the Sushi Nozawa restaurant group. Such aesthetic touches could help give Westwood an edge on competitors such as the Grove or Century City, said Steve Sann, chair of the Westwood Community Council.

“It’s so clear the wheels are in motion,” he said. “There’s all this momentum now.”