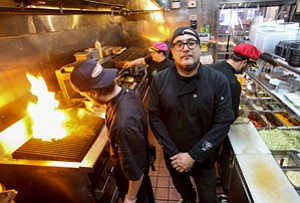 But when they find the job is hard and the work is more chopping onions than fronting TV shows, many hop among jobs or abandon the industry altogether.

That high turnover is causing problems for local restaurateurs.

“You hire somebody, you put money into training for two to three weeks and that person may decide not to show up again,” said David Lentz, chef-owner at Hollywood hot spot Hungry Cat. “It’s nearly impossible to run a kitchen with a full, consistent staff.”

Lentz sometimes can only serve dishes that his cooks on any given day are skilled enough to prepare.

In an industry where success depends on quality control, the high turnover has forced restaurants to pour precious resources into recruiting and teaching cooks while running on thin profit margins.

The problem seems to be starry-eyed youngsters thinking a restaurant kitchen is a shortcut to the Food Network.

“They’re enthusiastic but unaware of how hard the work really is,” said Marcus Christiana-Beniger, chef and co-owner at Little Jewel, a New Orleans-style bistro in Chinatown. “It’s not that you have a moment of Gordon Ramsay yelling at you. It’s a 400-degree fryer burning the crap out of your hand.”

Line cooks, or those who typically work at one station and are under a chef or sous chef, comprise the core of the industry, said Lachlan Sands, president of Le Cordon Bleu College of Culinary Arts in Pasadena.

In the past few years, graduates have landed jobs faster than ever, Sands said, with the employment rate hitting 92 percent last year. Jobs website Workpop said line cook is the most common job type, making up 16 percent of L.A. food industry positions.

Sands partially blames the popularity of food TV shows for pushing restaurants to develop sophisticated menus that are increasingly difficult to execute. That puts restaurants in a fierce competition to snag the best cooks they can find.

“If they’re good, you’re going to give them that extra dollar, or two or three dollars an hour, so they stay,” said chef Suzanne Tracht of Jar in Los Angeles. “Loyalty is everything.”

Ted Hopson, a “Top Chef Masters” alum who opened Bellwether in Studio City in the summer, said he also pays extra to retain his best cooks, even though it destroys his profit margin.

It wasn’t always this way. Working at Lukshon in Culver City a couple of years ago, Hopson said he would get 10 qualified applicants out of every 50 people responding to a Craigslist ad, providing plenty of options. Now, he hires anyone who can chop a vegetable.

“I’m just looking for people who want to be here,” said Hopson.

The new trend among millennials is to jump among restaurants even as their bosses dedicate hours to training, said Evan Kleiman, a chef and host of “Good Food” on KCRW-FM (89.9).

“Some people are looking at it as building a resume rather than building a career,” said Kleiman. “To leave in four months or five months is kind of devastating.”

Many restaurants depend on immigrant cooks, often Latinos, as their backbone, she added, because they tend to stick with steady work.

Steve Kasmar, chair of the culinary arts department at Los Angeles Trade-Technical College, said he began his cooking career in the 1980s with a three-year apprenticeship. Now, recruiters constantly call looking for cooks to start immediately. Some students end up quitting the program once they land a job.

“The industry has turned into this revolving door,” he said. “Young cooks will go work at a hotel or restaurant, get what they can out of it and move on.”

Hourly wages of $10 aren’t exactly incentives to stick around. Even experienced cooks only make $12 or $13 an hour at independent restaurants, and usually hit a ceiling of $17 or $18 an hour at national chains.

California’s minimum wage, which rose a buck in January to $10, has been fairly flat over recent decades even as living costs have skyrocketed. Many restaurants say they have lost cooks over as little as 50 cents. It remains unclear how restaurants will deal with a rising minimum wage that will hit $15 by 2020. Some eateries have added service charges in place of tipping to distribute extra money to kitchen workers who are typically excluded from tip pools.

Many cooks take extra jobs to make ends meet, especially if they must pay student loans. Tuition for a two-year associate degree at Le Cordon Bleu costs more than $26,800.

Recent graduate Landrow Batres has opted to work mornings at Bank of America – a job with benefits – and evenings at catering company Patina.

Other cooks leave restaurants altogether, wooed away by institutions offering higher pay, consistent hours and benefits. The need for cooks has shot up in recent years at hotels, universities, hospitals, retirement homes and grocery stores that must serve gourmet menus to remain competitive. As of last July, large L.A. hotels were required to offer base wages of $15.37 an hour.

Salvador Alvarez, a corporate chef at Katsuya, said one of his lead cooks bakes bread for a supermarket in the evenings after 10 hours toiling at the restaurant. He has seen other people find jobs at Costco and Whole Foods.

“It’s all about if they have enough to pay their bills and feed their family,” said Alvarez, who has lost one or two people a week across Katsuya’s eight restaurants in the last six months.

But Katsuya hedges against labor shortages by preparing its most difficult dishes, such as miso-marinated black cod, at a central commissary under the oversight of veteran cooks.

“It takes a huge worry off of us, because we know we’re getting the best cost effect of our fish and our meats,” said Alvarez.

Some emerging cooks have traded $10 salaries for the creative freedom of running a food truck that could lead to a restaurant.

Mario Alberto, a restaurant consultant who was recently chef at West Hollywood’s Laurel Hardware and Ysabel, says that fresh energy seems to appeal to entrepreneurs seeking to open hip and youthful restaurants.

“When I started, you had to work your way up the hierarchy for years,” he said, recalling months of washing rice and chopping onions. “Now, it’s more than likely someone’s going to gamble on you and open a business.”