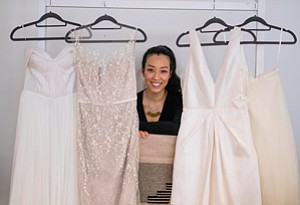 Brides will spend months searching for the perfect dress – booking appointments at bridal shops with bridesmaids in tow then waiting up to six months for the dress to be made.

The long process can be stressful, but Santa Monica startup Floravere wants to take the hassle and hefty price tag out of the equation.

Kang said she had heard from friends how much of a pain dress shopping is, but it wasn’t until her own engagement that she understood why.

“I had a six-month engagement,” Kang, 29, said. “I thought, OK, I’ll take my time and go wedding dress shopping later. But (shops) wouldn’t even take an appointment because to order a dress takes six to nine months.”

Plus, brides who spend more than $10,000 on dresses from high-end labels often have to wait more than six months to receive the finished product – a big pain point in the industry, said Kang. That’s the type of customer that Floravere is zeroing in on, at least for now.

“We think our customers are the slightly savvier consumer (who) wants a beautiful dress with high-end materials that feels nice, but it doesn’t have to have the Vera Wang name on it,” said Kang. “That’s the women we’re targeting.”

Floravere lets brides try dresses – made by former designers at luxury labels such as Dior, Zac Posen, and Reem Acra – at home. Once a bride has made her pick, she can order a customized version of one of Floravere’s seven dresses and receive it within three to four months. The price of a gown ranges from $1,550 to $3,550, and additional styles are due in February.

According to Brentwood research firm IBIS World, the average cost of a wedding dress in 2015 was about $1,700.

“It’s very much a disruption that can work in their favor,” Wallace-Brewster said. “But it goes back to the fact that in an ideal circumstance you only want to do this once. Are you going to try something that’s a totally new concept or go with what’s tried and true? It seems to me that it’s going to be hard to convince a new bride to try this concept.”

Kang, who previously worked as a manager of strategic planning at Guess Inc. and as a senior associate consultant at Bain & Co., tested her idea for two years while attending Stanford University’s Graduate School of Business. She graduated last year and was able to raise an undisclosed sum from friends, family – and even one of her professors.

Kang brought the idea to Mucker, which also invested in the company, shortly after graduation to further develop the business.

Floravere contracts with designers who have worked at luxury wedding labels to create its namesake collection, which is designed and manufactured in New York.

Brides select up to three sample gowns to try on at home for $45 each and have three days after receiving their bridal box to return the samples at no additional cost. Kang said Floravere will also roll out plans this month that allow brides to order unlimited samples as well as request extra time to try them on. While those out-of-pocket costs can add up, they are deducted from the bill if the bride orders a dress from Floravere. According to Kang, the company has so far accumulated a list of more than 2,000 interested customers.

The idea is to allow brides to host try-on parties with friends in the comfort of their home, as opposed to heading to a retail shop where appointments often are capped at an hour. Customers can also customize their chosen gown with alterations such as a raised neckline, added train, or a monogram in blue stitching for an additional fee ranging from $50 to $200. Veils are available starting at $85.

Kang said Floravere is able to offer competitive pricing because the company ships directly to consumers rather than sending large orders to retailers. Also, because wedding labels show their collections in the spring and fall, Floravere makes a point of contracting with designers during the off-season when their rates are cheaper.

“We try to take advantage of the free capacity between shows and release collections off calendar,” she said. “It allows us to be flexible and nimble … and react to trends or what customers might be seeking.”

Andrew Blackmon, co-founder and co-chief executive of Santa Monica online suit and tuxedo rental Black Tux said the real challenge when it first launched was the logistics side of the business – not the marketing.

“To be honest, marketing in the wedding space is less challenging,” said Blackmon, whose business also incubated at Mucker. “The hardest part of the business ended up being operations and the easiest was marketing.”

He said the social element of weddings helped his business go viral through personal recommendations.

Floravere nevertheless faces challenges as it works to grow the business, said James Dion, founder of Chicago retail consulting firm Dionco Inc. For example, the company doesn’t offer customers the opportunity to be fitted by a seamstress after purchase. It’s often suggested that brides be fitted at least two times prior to their wedding date to ensure a perfect fit.

“The whole purpose of bespoke is that it’s made for your body,” Dion said. “This is maybe the third-largest investment (a bride) is ever going to make – one being a home and second being a car. It’s a big deal.”

Kang said in her experience and research many brides opt to find a tailor as opposed to using in-house services at bridal shops, which charge a premium. Floravere is also putting together a list of recommended tailors in major cities for its customers.

Also, while most e-commerce companies spend 8 percent to 12 percent of their revenue on marketing costs, Wallace-Brewster of Onestop said Floravere will have to spend more on customer acquisition because wedding dress shoppers are not repeat customers.

“I would assume theirs would be double to triple that,” he said. “The more targeted your market is, the more expensive.”

Kang said she considers Floravere’s niche market a positive when it comes to marketing.

“Unlike trying to sell T-shirts or underwear, we know exactly who our customer is, when we need to get the brand in front of her, and when she is most likely to make her purchase along the wedding planning cycle,” she wrote in an email. “All crucial data that makes it much easier for us to spend our marketing in a targeted, specific way.”