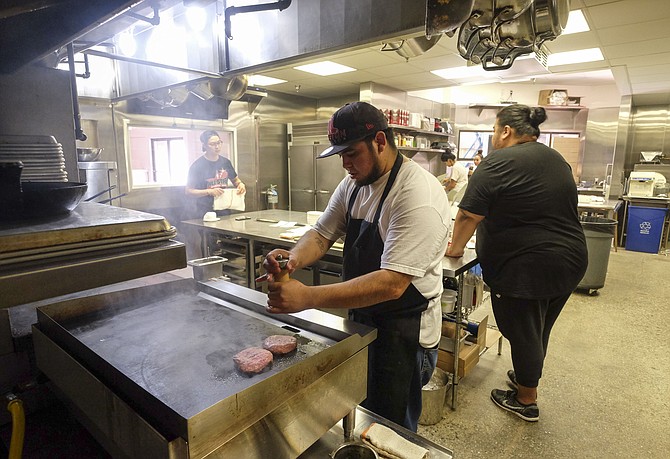 Cook works the grill at 'culinary incubator' Unit 120 in Chinatown.

Chef Alvin Cailan made it big with breakfast-themed eatery Eggslut, now in downtown and Las Vegas with two other locations planned. But when his Chinatown restaurant Ramen Champ lasted less than a year, he started thinking about how he might have done things differently to ensure its success.

“I said, man, if only I had an opportunity to test all my concepts out before I put $500,000 into a restaurant and gambled,” Cailan said. “The last thing I want to see is good people with good intentions going broke over restaurants that they could have tested.”

The result of his brainstorm is Unit 120, a “culinary incubator” meant to help chefs prove themselves before sinking money into untested ventures.

Unit 120 opened in Chinatown in January and is essentially a blank-slate restaurant for a rotating roster of up-and-coming chefs. About eight projects trade off at the 38-seat eatery, including Filipino cuisine concept Lasa, which recently scored praise from food critic Jonathan Gold.

The incubator is proving to be a steppingstone for chefs whose skills might otherwise go unnoticed in the old-fashioned workings of the restaurant industry, said Lachlan Sands, president of Le Cordon Bleu College of Culinary Arts in Pasadena.

“There are tons of uber-talented cooks out there buried in kitchens because of outdated concepts of paying one’s dues, promotion through seniority, and quite a bit of misogyny,” he said. “Unit 120’s ability to accelerate chef development will be a long-term blessing for the L.A. culinary scene.”

Cailan said he first offered an “open-door policy,” but ended up with inexperienced chefs looking for space. He realized he needed to offer a reality check as much as encouragement, and developed a business training program. Part of that is connecting wannabe restaurateurs with investors, and teaching them that opening even a barebones restaurant would likely cost $90 a square foot. Fancier restaurants can swallow $300 a square foot, or as much as $5,000 a square foot for luxury concepts.

He said his other task is to make sure Unit 120 stays afloat while experimenting with menus that could flop. He charges restaurateurs a flat fee of $400 a day to cover utility and equipment costs and takes 10 percent of the project’s revenue if it generates more than $1,200 in a day.

“We’re not making a ton of money, but we’re giving an opportunity, keeping the lights on,” Cailan said. “Ultimately, this one building will generate 15 or 16 restaurants next year.”

Newcomers vying for a spot must prove their worth on the first Thursday of each month at Far East Plaza’s food festival Chinatown After Dark. Those who can command long lines earn the chance to officially audition with a small dinner.

More than 17 chefs have now cooked at Unit 120. Isa Fabro, a former pastry chef for downtown restaurateur Josef Centeno, was tapped to sell her Filipino-inspired desserts at events such as Coachella Valley Music and Arts Festival after winning acclaim at Unit 120. Here’s Looking at You in Koreatown opened in June, but not before co-owners Jonathan Whitener and Lien Ta did a one-night trial run at Unit 120 and got an infusion of cash from investors.

The next rising star might be Lasa, from brothers Chase and Chad Valencia. The pair began hosting pop-up dinners in 2013 while working other restaurant jobs and opened at Unit 120 in January. Every Friday, Saturday, and Sunday, they serve prix-fixe dinners at $48 a person, attracting 120 to 150 guests each weekend. The brothers aim to relocate to a permanent restaurant in a few months, but not without careful calculations.

“We are showing proof that we are capable as a business and our food can attract guests,” said Chase Valencia.