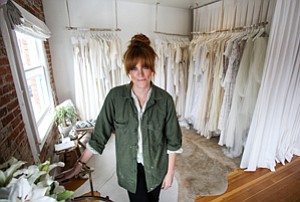 High on Space: Orla Stiles in the second-story space of her Solstice Bride shop. Photo by Ringo Chiu.

It’s no secret that the tech industry has transformed Venice, and now the resulting surge in real estate prices is affecting the area’s most iconic shop-lined thoroughfare: Abbot Kinney Boulevard.

While the roughly eight-block stretch of restaurants and retail is still drawing in new tenants despite sky-high rents, some are wondering if the crop of boutiques and eateries can also pull in enough sales to cover the cost.

After all, longtime fixtures such as Hal’s Bar & Grill and Roosterfish are already gone, having been priced out of the rental market.

“The rents are ridiculous,” said Jerry Prendergast, founder of Culver City restaurant consultancy Prendergast & Associates, who added that many retailers move in as part of a marketing strategy. “I’m seeing up to $12 a square foot. I can’t pencil anything out that works there in terms of the volume I would have to do to pay the rent. A lot of them are just doing it as vanity locations.”

Prendergast said businesses on Abbot Kinney should expect to pay rent of between 8 percent to 10 percent of gross revenue. So if a restaurant wanted to lease a 2,000-square-foot space at $8 a foot it would need to do about $200,000 in sales a month.

Some, such as Orla Stiles, have looked for workarounds to the problem. Stiles is the 30-year-old founder of bridal shop Solstice Bride on California Avenue, mere steps away from Abbot Kinney. Her shop sits on the second floor above Abbot’s Habit café, but because the entrance is on California, the rent is substantially cheaper. Her signage, however, is on Abbot Kinney. She pays $3,600 a month in rent for her roughly 600-square-foot space, but all she found on Abbot Kinney were larger spaces starting at $10,000 a month.

“I got lucky,” she said. “I found a space a little less than what my peers are spending.”

But she did have to compromise: “I’m on a second level with a private entrance so I had to edit my business model to be appointment only.”

California wasn’t as kind to Nicole Papadopoulos, co-owner of clothing boutique LulaMae, who said it was tough operating a shop there. Her store opened in late summer 2014 but moved to Culver City a year later. Sales were great the first few months, according to Papadopoulos, but nosedived last summer.

So she broke the 10-year lease on her 560-square-foot space for which she was paying about $10,000 a month – losing her security deposit. Her rent was comparable to Abbot Kinney because it was a storefront and its new owner had paid a premium price for the building and adjacent locations, which included Hal’s.

“We knew what we were getting ourselves into, but based on research we thought we could still make the numbers,” she said. “There’s a false sense of what the traffic looks like on that street. You’ve got a lot of people but no one is shopping. They’re there for the destination. They’re there for food and they’re there for coffee.”

Papadopoulos added that in the year she operated in Venice she witnessed at least six retailers close.

Venice has long been an oasis for surfers, artists, and hippies. While Abbot Kinney became a prime spot for mom-and-pop shops catering to locals, the street has seen increasing gentrification over the years as spaces have filled with chains such as Toms Shoes and Blue Bottle Coffee.

“The way we look at Abbot Kinney and the way tourists look at Abbot Kinney is totally different,” Turf said. “Five years ago, I don’t think Abbot Kinney was half of where it was at today. Retailers started moving in and along came Rag & Bone, Blue Bottle, and IRO, and rents go through the roof because they want the edge factor that Venice has, (and) they want to be on money’s doorstep, which it is.”

But the influx of cool has nudged out some of the neighborhood’s mainstays, such as gay bar Roosterfish, which is closing next month. Its 1,750-square-foot space is on the market for $26,250 a month, or $15 a square foot.

Santa Monica-based Robert Cohen, vice chairman of New York real estate brokerage RKF, said the prices are getting to the point where it’s unsustainable for retailers to remain on the street.

“A lot of my clients are saying, Is it really worth $180 a foot (annually) to be on the street? I’m struggling to come up with sales volumes from other retailers to support that.”

Christine Deschaine, senior vice president of brokerage at Kennedy Wilson’s Beverly Hills office, said rates on Abbot Kinney are not that far off from those of Melrose Place and Third Street Promenade, which range from $15 to $20 a square foot.

“Rents have been high on those other streets,” Deschaine said. “Obviously, national and regional brands can sustain higher rents, but sometimes it’s not just the rent. It’s what are you selling and are you getting people in the door and pricing your product right as well?”

Keeping Abbot Kinney hip is a delicate balance and one that poses a contradiction, RKF’s Cohen said.

“People want to maintain the cool factor on Abbot Kinney with all these cool local tenants,” he said. “But at the end of the day, these cool local guys can’t all really afford to pay these high rents.”